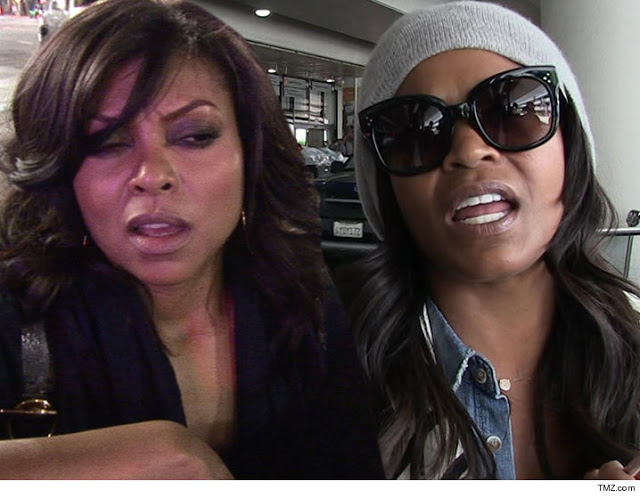 The Breaking News of a Feud between this two black Great Actresses is really a Surprise for me,but TMZ cant be lying.

It all started from a joke, when Nia arrived late for a Scene shooting on the Music Series Empire, prompting one of the male actors to joke, “Damn, why are you on black people time?”

Nia got pissed and went all out on the actor,which made taraji to add more jokes which lead to a more raging Beef.

TMZ reports, According to TMZ, Nia showed up late shortly after beginning her stint on the show, prompting one of the male actors to joke, “Damn, why are you on black people time?”

We’re told that sent Nia into a rage … chewing the guy out. The actor told her it was just a joke but she continued berating him … and that’s when Taraji fired back — “What are you, on your period? Is it that time, girlfriend?”

Things got super heated … and it set the tone for a relationship that was barely civil. Taraji has always been super protective of the cast and crew and everyone was in her corner.

Hair and makeup crew are said to have filed a complaint against Nia, for mistreating them. She maintains the allegations are bogus.
READ ALSO
Popular actress, Yvonne Jegede says she underwent surgery to have a sexy look

Violette - October 6, 2019 0
Nollywood actress, Lilian Esoro took to her Instagram page this beautiful Sunday afternoon to show case her beautiful face with out make up to...

Johnson Olumide - October 16, 2018 0
A Nigerian lady, Hauwa Liman, on Tuesday, decried the usage of her photos in place of the aid worker, who was executed by Boko...

Johnson Olumide - April 23, 2019 0
Ifu Ennada who shared her observation about most married men who post photos of their wives and kids on social media, stated that they...