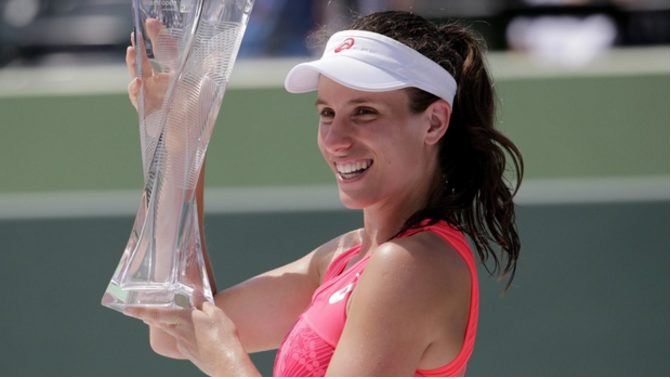 KEY BISCAYNE, Fla. (AP) — Johanna Konta lofted a lob off the baseline for a winner on championship point, waited for instant replay to confirm the call and even then hesitated to celebrate the biggest title of her 11-year career.

“To be honest, I actually couldn’t kind of believe it was over,” she said with a grin.

Seeded 10th, Konta was an unlikely champion, but the Australian-born Briton beat Caroline Wozniacki 6-4, 6-3 in Saturday’s final at the Miami Open.

Rafael Nadal and Roger Federer renew their rivalry where it began in the men’s final Sunday.

Konta, a late bloomer at 25, improved to 19-3 this year and will climb to a career-high No. 7 next week. She was the first British woman to reach a Key Biscayne final, a tournament she was unable to qualify for just two years ago.

“On paper it looks like a quick turnaround,” she said. “But it definitely has been a lot of years and a long time coming.”

Konta was the more aggressive player in the final and finished with 33 winners, compared with eight for the 12th-seeded Wozniacki. Konta showed her versatility on the final point, drawing Wozniacki to the net with a drop shot and then floating a lob off the back of the line for the clincher.

Konta received $1.18 million. Her other titles came at Sydney this year and Stanford in 2016.

Both finalists benefited from the absence of eight-time champion Serena Williams, who missed the tournament because of a knee injury.

There were thousands of empty seats on a humid afternoon with temperatures in the upper 80s. Meanwhile, tickets sold for more than $500 for the men’s final Sunday.

Nadal and Federer’s first encounter took place in the round of 32 at Key Biscayne in 2004. Now comes the 37th match between the two champions, and the third this year. Federer beat Nadal in the Australian Open final in January, and in the fourth round at Indian Wells two weeks ago.

Six-time champion Novak Djokovic and two-time time champion Andy Murray skipped the tournament because of elbow injuries, which diluted the draw. Even so, it’s clear Federer and Nadal are back at the top of their game, which whets the appetite for what might be to come in this year’s three remaining Grand Slams.

The 35-year-old Federer is 18-1 this year, including 6-0 against top 10 opponents. Even so, he said, he came to Key Biscayne with modest expectations, figuring his recent run of success would be difficult to sustain.

“I just thought: ‘Eventually it’s just going to catch up with me. I already won Indian Wells. So let’s be realistic here,'” Federer said. “But here we are in the final, and I get a chance to win the tournament. Still I feel like there is a mountain to climb in Rafa. He’s definitely feeling fresher than I feel right now.”

Federer had to save two match points in his quarterfinal win over Tomas Berdych, and was extended to three tiebreakers in a wild semifinal victory over Nick Kyrgios.

But he’s again winning the big points, which is why he has won 18 major titles.

“He’s playing so good,” Nadal said. “When top player like him is playing that well, then it’s always a big challenge.”

Nadal is 0-4 in Key Biscayne finals, with the most recent loss in 2014. He’s playing in the event for the 13th time, making the title drought his longest at any tournament.

“Winning or losing, being honest, not going to change my career,” he said. “It just helps to add something important for me, and that’s it.”

This story has been corrected to show that Federer beat Nadal in the fourth, not final, round at Indian Wells.