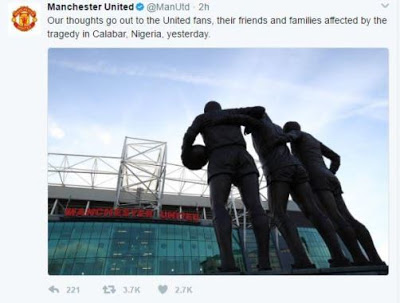 Tragedy Stroke on Thursday as 30 football fans meet their ill-fated Death in Calabar after they where electrocuted  while watching the Uefa Europa Club competitions between Manchester United and Anderlecht.

The Red Devils via the club’s social media platform has sent out their condolence to the family of the victims.

In a statement issued through their Twitter page, it read: ‘Our thoughts go out to the United fans, their friends and families affected by the tragedy in Calabar, Nigeria, yesterday.