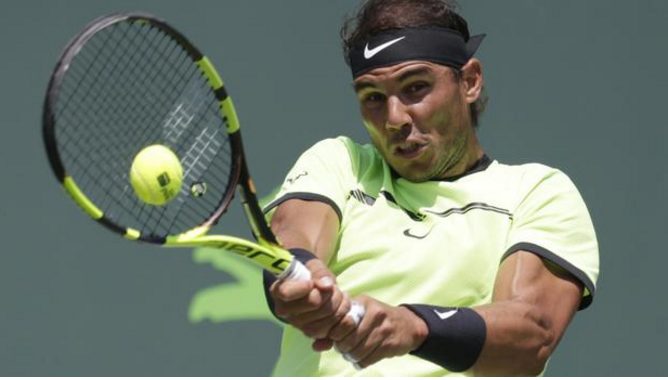 KEY BISCAYNE, Fla. (AP) — Rafael Nadal was so eager to reach the Miami Open final that he ran out of his shoe.

Chasing a shot in the second set of Friday’s semifinal, Nadal lost his right sneaker — and the point. But he quickly regained his footing and beat unseeded Fabio Fognini 6-1, 7-5.

“Winning here would be something great, and an important title I haven’t won,” Nadal said.

His opponent Sunday will be the winner of Friday night’s match between Roger Federer and Nick Kyrgios. There will be a first-time Key Biscayne women’s champion Saturday when Caroline Wozniacki plays Johanna Konta.

Nadal, seeded fifth, eliminated Fognini without facing a break point, and lost only nine of 46 points on his serve.

Fognini, the first unseeded men’s semifinalist since 2007, looked listless at the start in 86-degree sunshine. He finished with 38 unforced errors, compared with 12 for Nadal.

“I was missing a lot of balls,” Fognini said. “I give him a present the first set. I was playing really bad.”

Said Nadal: “Fabio is a player who is able to combine great points with mistakes. The match became strange — not a lot of rhythm. The second set was tough.”

The crowd chanted Fognini’s first name in an attempt to get the Italian going, and flying footwear did the job. Fognini hit a drop shot to cause the sneaker malfunction, laughed at length while Nadal retied his shoe and played better after that.

Nadal said he also lost a shoe while practicing recently, the only other time he can remember it happening to him.

“Strange,” he said. “Maybe I need to tie it stronger.”

The second set was up for grabs until Fognini double-faulted to fall behind 6-5. Nadal then served out the match at love.

“I served well,” he said. “That gives you calm when you have opportunities on the return.”

Violette - July 2, 2019 0
As written by Reno Omokri; On April 18, 2018 at the Commonwealth Heads of Government Meeting in London, Nigeria’s President listened as other commonwealth leaders...

EndSars: Struggling with my emotions – Heartbroken DJ Cuppy cries out

Violette - May 8, 2021 0
Davido's aide, Isreal DMW has revealed that billionaire businessman Femi Otedola played an important role in getting him a university degree. Isreal DMW was caught...