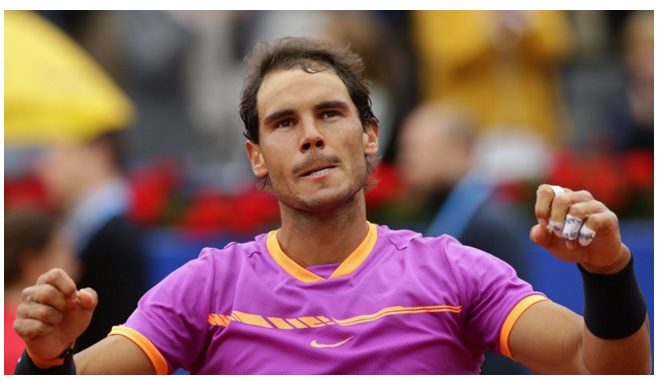 Nadal beat Horacio Zeballos of Argentina 6-3, 6-4 after the fourth-seeded Thiem dispatched with Murray in windy conditions at the Real Club de Tenis.

Murray’s defeat came a week after he exited the third round in Monte Carlo. That loss prompted Murray to enter Barcelona to whip up some form for the French Open following a right-elbow injury.

Murray looked on the bright side of getting extra matches on Barcelona’s outdoor clay.

“I got three matches in three days against all different players,” Murray said. “Feli (Felicano Lopez) uses a lot of slice and variation, (Albert) Ramos-(Vinolas) yesterday is a lefty and today against Dominic, who plays with the kick serve and so much spin. To play two hours today after three yesterday, will be good for me.”

Nadal, a nine-time champion at Barcelona, said he “wasn’t surprised” by Thiem’s first win over Murray in three attempts.

“Thiem is a specialist on clay, one of the best in the world,” Nadal said. “It will be a tough match for me, but I am just happy to be back in the final.”

The ninth-ranked Austrian had a break point in the second set, but Murray held serve and broke him back to even the match at a set apiece.

Murray was again in trouble at 4-2 down in the decisive set, and folded when he failed to successfully return Thiem’s deep lob on match point.

“He’s the No. 1 in the world, so you have to find something in between playing aggressive and not making mistakes,” Thiem said. “I was the luckiest in the end.”

Thiem will be seeking his second title of the year to add to his eight career titles.

Nadal looked set to roll past Zeballos, but he had to save five break points to get the straight-sets win.

Nadal won his 10th Monte Carlo title last weekend. Sunday’s final will be the fifth of the season for the Spaniard as he primes his clay-court game for Roland Garros in a month.
READ ALSO
Lionel Messi Scores 300th Goal At Camp Nou In Eibar Thrashing