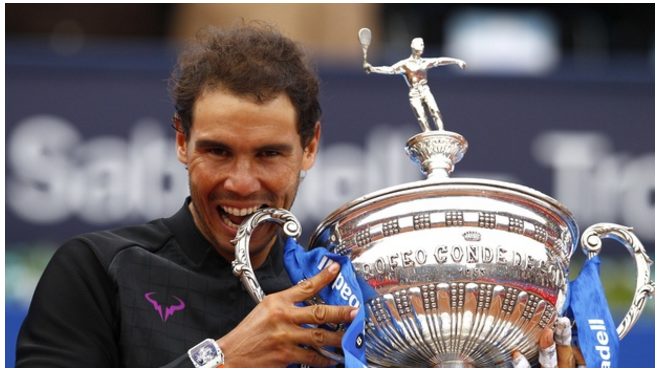 It was the second consecutive week that Nadal had won a tournament for the 10th time. He had become the first men’s tennis player in the Open era to win the same title 10 times at the Monte Carlo Masters last Sunday.

“It means a lot to me to win 10 titles here in Barcelona as well,” Nadal said. “To win in Barcelona and Monte Carlo gives me a dream start to the clay season.”

It was Nadal’s second title of the season and 71st of his career. The fifth-ranked Spaniard had lost his previous three finals, including to Roger Federer in the Australian Open.

Next month he will try to win a 10th French Open title. The last of his 14 Grand Slams was three years ago in Roland Garros.

Nadal broke the ninth-ranked Austrian late in the first set and early in the second, then cruised to close out the match for his 51st career title on clay. He saved the only break point he conceded to Thiem at the “Rafa Nadal” center court. He was only broken twice in 47 service games throughout the week.

“It was vital for me to win the first set,” Nadal said. “It was difficult. I had a few more chances than him, but it was very even.”

Thiem, who had upset top-ranked Andy Murray in the semifinals on Saturday, was trying to win his second title of the season. He won in Rio de Janeiro in February.

Tonto Dikeh Involve in a Heated Exchange With Fans After She Scolds Anita Joseph...

Violette - November 24, 2019 0
Following the outburst of Anita Joseph on social media, Actress Tonto Dikeh has reacted to the issue as she tends to settle the quarrel. Recall...

Violette - November 26, 2020 0
Reality star, Ozo have become the latest member of the Big Brother Naija 'Lockdown' housemate to bag a new endorsement as he announce his...

Alex Ekubo lists the 3 types of money in the world after Obi Cubana’s...

Violette - July 17, 2021 0
Popular Nollywood actor, Alex Ekubo has revealed the lesson he learnt at the burial of popular businessman Obi Cubana's mother, in the process listing...