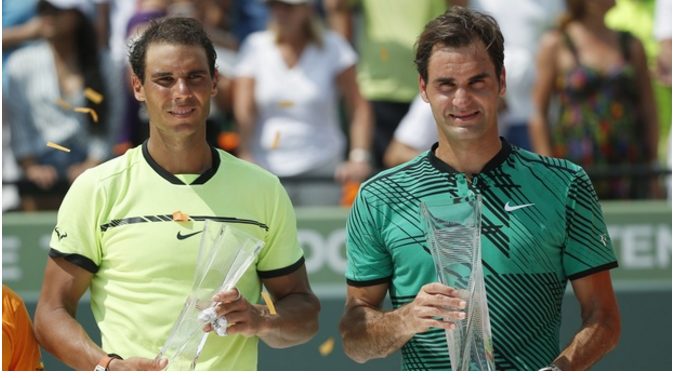 The two former world no 1 players are currently playing the Best Tennis in the 30’s and Mid 30’s, since the turn of the Year it been an Awe watching this two Great player whom share between them 32 Grand Slam titles.

According to Tennis.com, Roger Federer and Rafael Nadal are back in the ATP Top 5 this week. Federer, ranked fourth, moved up two spots after winning his third title of the season in Miami. Nadal, who lost to his Swiss rival in straight sets in the final, also moved up two spots to No. 5.

Federer is back in the Top 5 for the first time since the week of August 29, 2016, when he was No. 4. Prior to winning the Australian Open in January, coming off knee surgery and a six-month layoff, he had fallen to 17th in the world.

Nadal, who began the year ranked ninth, was last in the Top 5 (No. 5) in October of 2016. The Spaniard hasn’t won any titles thus far in 2017, but he’s posted a 19-5 record and reached finals in Melbourne, Miami and Acapulco.


With the clay-court season—his favorite season—ahead, he appears primed to inch even closer to the top spot. Only 570 points currently separate Federer (5,305) and Nadal (4,735) in the rankings.


Federer -“You’ll Probably See Me At The French”

Andy Murray (11,960) and Novak Djokovic (7,915) are still No. 1 and No. 2, respectively, despite missing Miami with injuries. Djokovic will play for Serbia in Davis Cup this upcoming weekend, but it’s unclear when Murray will return to the tour.

Stan Wawrinka, who fell to Alexander Zverev in Miami last week, is No. 3 between Djokovic and Federer.

Rounding out the Top 10 are No. 6 Milos Raonic, No. 7 Kei Nishikori, No. 8 Marin Cilic, No. 9 Dominic Thiem and No. 10 Jo-Wilfried Tsonga.
READ ALSO
#BBNaija: Bambam bursts into tears in diary session [VIDEO]