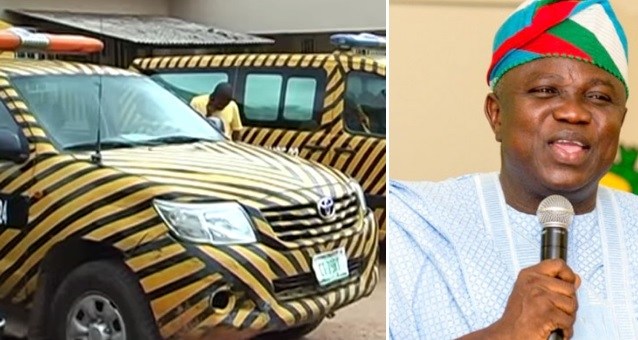 Over the Last decade the overzealousness of some VIO men cannnot be overemphasized as it as lead to loss of vehicles and also perishable goods.

many complains had been made over the years, it was in the light of this numerous aggrevaition of the public against the VIO that made his Excellency Govenor Ambode ordering the state’s Vehicle Inspection Officers, VIOs out of Lagos roads with immediate effect for retraining as a result of public complaints and in a bid to reposition the outfit.

It was gathered that Governor Akinwunmi Ambode handed down the directive as a result of public complaints.

Sources in the Ambode-led administration also said the removal of the officers from the state’s roads was to reposition the outfit.

“The story on a painter, whose car got burnt in VIO’s custody, caused a discreet investigation into the activities of the outfit and I can tell you that the report was not palatable.

“Apart from this, complaints about the overzealousness of some VIO men have reached a high level.”

The governor, who said he would not tolerate any highhandedness in his administration, ordered them out of Lagos roads until further notice,” one of the sources said.

A VIO source, however, said the governor told them to leave the roads and go on ‘compulsory retraining on the use of modern technology in order to be humane in dealing with the public,’ adding that the VIOs would be back on the road soon.

It was gathered that the training had been arranged since the officers left the road last week.

The state Commissioner for Information and Strategy, Steve Ayorinde, said nobody had hindered the VIOs from performing their duties.

READ ALSO
Golden State Warriors on Cruise Control as they take Game 3 to beat the Cleveland Cavaliers 118-113
He said, “The truth is that the transport ministry is undergoing restructuring, including the VIOs. The commissioner for transportation had made some recommendations, which he will present at the State Executive Council meeting and things can move forward from there.

“But we all believe that the VIOs’ activities should be technologically driven and more. These will be seen soon.”