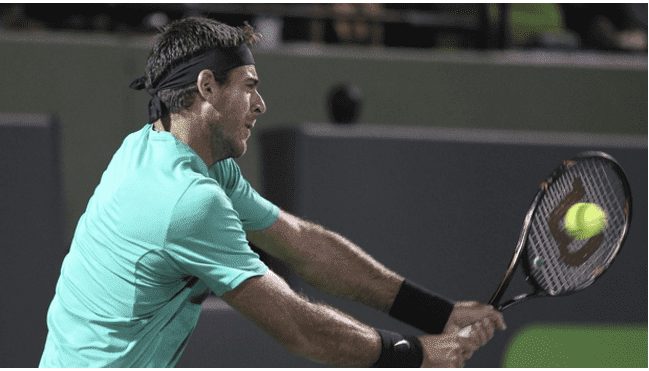 PARIS (AP) — Juan Martin del Potro is back at the French Open for the first time in five years, and the 2009 U.S. Open champion had little trouble picking up a victory.

After a series of wrist operations kept him off tour for months at a time, del Potro has shown that he is once again capable of using his big forehand to great effect. He beat qualifier Guido Pella 6-2, 6-1, 6-4 in an all-Argentine matchup in the first round at Roland Garros on Tuesday.

In another early result at the year’s second major tennis tournament, No. 7 seed Johanna Konta of Britain bowed out with a 1-6, 7-6 (2), 6-4 loss to 109th-ranked Hsieh Su-wei of Taiwan. Considering the setting, the result is not all that surprising: Konta has now lost all three matches she’s played at the French Open over her career.

Winners included No. 18 Nick Kyrgios and No. 5 Elina Svitolina.

Del Potro showed no sign of the shoulder and back problems that hampered him at the Lyon Open last week and did not face a single break point.

His best result at the French Open was reaching the semifinals in 2009, just months before he won his Grand Slam title in New York.

With only four main draw wins on clay in her career, Konta was looking to prove she could be a force on the red surface. The 26-year-old British player got off to a flying start, winning 13 of the first 15 points and taking the first set.

But Hsieh fought back and Konta had to save five break points before her opponent eventually prevailed in the second-set tiebreaker.

Hsieh, who won the doubles at Roland Garros in 2014, earned the win on her second match point after Konta sent a return into the net.