PARIS (AP) — Serena Williams was back on the Grand Slam scene Wednesday, only she was snacking on a piece of fruit while sitting in a shaded part of the stands at the French Open, watching her older sister win in straight sets instead of playing a match herself.

About six months pregnant, and off the WTA tour for the rest of this season, Williams was blase about attending a major tournament as a spectator rather than a participant.

“It feels fine. I don’t feel anything,” she said Wednesday before leaving the Roland Garros grounds. “It’s just a part of my life.”

As everyone connected to the sport acknowledges, tennis events simply are not the same without Williams in the draw. She generates attention and wins more than her share of trophies — the Australian Open championship in January, while she already was expecting, was her 23rd at a Slam.

She beat her sister Venus in that final. Now Venus is the only Williams who’ll be in tournament brackets until 2018, when Serena vows to return.

“I’m sure she feels the excitement of being at a major and not having the pressure to play and prepare. Must be an interesting feeling, to say the least,” the 10th-seeded Venus said after taking 11 of the last 12 games and beating Kurumi Nara of Japan 6-3, 6-1 to get to the third round. “But she knows exactly what it’s like out there, and she’s had a lot of success here.”

So what’s it like for her to be an observer nowadays?

“It’s like any athlete: When you watch another player, you can see everything that they’re not doing and you want to get out there and do it yourself. That’s the way it is,” said the sisters’ mother, Oracene Price. “She can’t wait to come back, though. Actually, she’s working toward it now.” 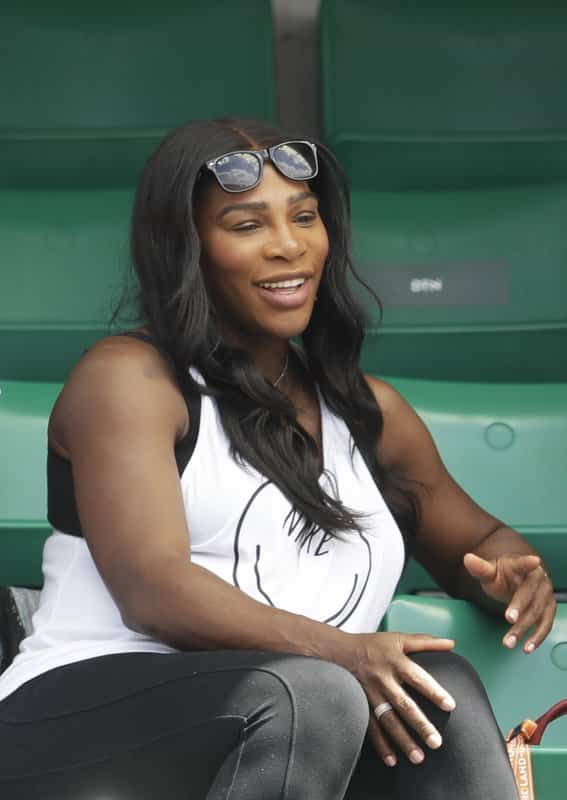 Yes, Serena is not staying idle.

Her coach, Patrick Mouratoglou, said Serena recently texted him “and she said: ‘It’s going to sound weird, but I’m going on the court. I don’t want to lose my touch.’ That was her joke, talking about losing her touch. But she wants to keep in contact with the racket and the ball. There is no doubt that she plans to come back.”

Mouratoglou added that Serena already is talking about making it back in time to play the Australian Open next January.

“For anyone, it sounds impossible, because it’s too short a time after you give birth,” said Mouratoglou, who noted that he is planning to continue as her coach whenever she is ready to return to competition.

“But Serena is Serena. There is no rule that you can apply to Serena. She has a body that is not anybody’s body. She has a will that is also completely unusual. She is one of a kind,” he said. “I never see any limits for her and put any limits to her, because that would be wrong. So if she says Australian Open, it’s going to be the Australian Open.”