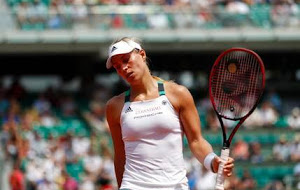 Makarova broke Kerber’s serve twice in the opening set and did so again in the second, racing into a 3-0 lead.

“Well,” Makarova said when informed of the history made by her victory, “that’s unbelievable.”


Kerber won the Australian Open and U.S. Open, and was the Wimbledon runner-up, in 2016, surging to the heights of tennis. But this year has been much more of a struggle: The German has a 19-13 record, losing 4 of her past 6 matches.


Her strokes were off all match against Makarova, who has reached two major semifinals, but never been past the fourth round in Paris. Makarova even pointed out that she never before had played a singles match in the tournament’s main stadium (she was the 2013 French Open women’s doubles champion).

Kerber had only four winners and 12 unforced errors in the first set and didn’t even earn a break point until the last game, which Makarova won, anyway. Makarova then raced to a 3-0 lead in the second set.


Kerber showed some signs of getting into the match, smacking a cross-court forehand passing winner, leaning forward and yelling as she took a game to get within 3-1. But that was about it. In the last game, Kerber had seven break points but Makarova fought off each one before holding to win.


“It was really tough. She’s a No. 1 and she’s a great player and I knew that I have to win it; she’s not going to miss it,” Makarova said. “I was also fighting with my emotion.”


In the preceding match on Court Philippe Chatrier, Petra Kvitova was back competing in a tournament, less than six months after a knife attack at her home.


Kvitova, a two-time Wimbledon champion, had very little trouble in her return, beating 86th-ranked Julia Boserup of the United States 6-3, 6-2 in 74 minutes.


“I think it doesn’t really matter how I played, but I won,” Kvitova said. “I won already, before.”


Indeed, just being there under a cloud-filled sky at Roland Garros was a victory for Kvitova, who needed surgery on her left hand – the one she holds her racket with – after being stabbed by an intruder in the Czech Republic in late December. She was undecided until late last week whether to even try to play in the French Open.


“It’s a pleasure to be here. I’m really glad that we made this decision that I’m going to play here,” Kvitova told the crowd during an on-court interview.


Then, addressing her guest box, which included her parents and brother, she said: “Thank you for everything you helped me through (in) this difficult time.”


In one other early result of significance, 2015 U.S. Open runner-up Roberta Vinci exited the French Open in the first round for the fourth year in a row. The 31st-seeded Vinci, most famous for ending Williams’ hopes of a calendar year Grand Slam by beating her in the semifinals at Flushing Meadows in 2015, lost to Rio Olympics gold medalist Monica Puig 6-3, 3-6, 6-2.


On Sunday, several members of Kvitova’s entourage wore black T-shirts with white capital letters on the front that read, “Courage. Belief. Pojd.” That last word, which is the Czech equivalent of “Come on!” and was spelled on the shirts with a red heart instead of the “o”, is often yelled by Kvitova to celebrate particularly good shots.


There was quite a bit of that against Boserup, who was making her debut in the French Open’s main draw and facing a lefty for the first time.


When it was over, Kvitova dropped her racket near the baseline and removed her blue headband. As she walked to the net for a handshake, her eyes welled with tears.

Angel, Moet and many others speaks up on Tiwa Savage’s leaked sex-tape

Ifeoma Ngozichukwu - October 19, 2021 0
Ex-BBNiaja star, Angel and OAP Moet Abebe has lent their support to the superstar, Tiwa Savage following the release of her sex-tape. Many fans and...

“Husband isn’t going to fly in to find you” – Toke Makinwa warn single...

Violette - March 1, 2020 0
Media Personality, Toke Makinwa warn single ladies who are in the habit of complaining about their status. With the rate at which some single ladies...

Johnson Olumide - February 17, 2020 0
This Photo above is for all the beautiful women, Mums, Mothers, Sisters, ladies with Brilliant Minds whom will stands up and say no to...

Johnson Olumide - March 21, 2020 0
She might not be made of black, but Sonal Maherali definitely speaks Luxury and Class. At an interview with TUKO´s Lynn Ngugi, the breathtaking You...