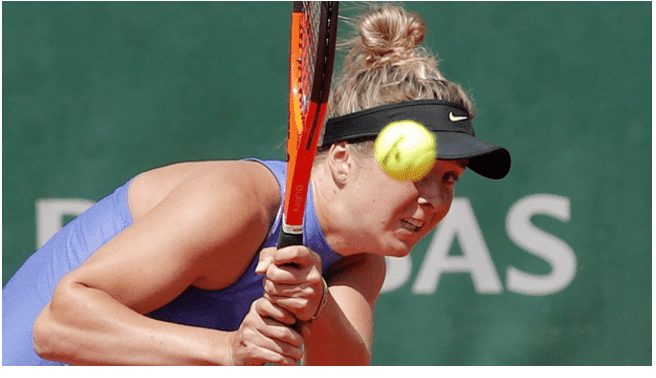 Svitolina, a 22-year-old Ukrainian who recently broke into the top 10, said a foot injury could force her to skip Wimbledon.

“There is a question about it,” Svitolina said. “I will talk with my physios. The season is very long and I must look at the bigger picture.

“The heel feels painful and is very sensitive. I am disappointed I am out of the tournament but I am not disappointed with my performance, because I could not show even 50 percent. Also the court was slippery which is bad for the foot.”

Giorgi will next face Ashleigh Barty in the quarterfinals.

The Aegon Classic originally boasted seven of the world’s top 10 players, but four withdrew with injuries. It has now lost the two top seeded players who started the tournament, Svitolina and Dominika Cibulkova.
READ ALSO
Davido Hangs Out With Usher Raymond And DMW

Violette - January 25, 2020 0
Former big brother naija star, Kim Oprah has served her fans on social media a stunning view of her curves as she dazzle in...

Violette - January 24, 2020 0
Award winning singer and songwriter, Davido paid his former high school a visit and students of the school just couldn't get over it. The singer...

Johnson Olumide - April 12, 2018 0
Controversial Big Brother Naija 2018 housemate, Cee-c has revealed her favourite housemate and its a surprising pick. Cee-C, speaking with Big brother during her...

Trouble looms as former BBNaija bestie Lucy and Ka3na unfollow each other on Instagram...

Violette - January 6, 2021 0
Seems another drama is set to unfold between Big Brother Naija housemates as Lucy and Ka3na decide to end their friendship on photo-sharing-app, Instagram. Big...