Home News Black Sunday in London as Knife Attackers Left 12 Dead and over... 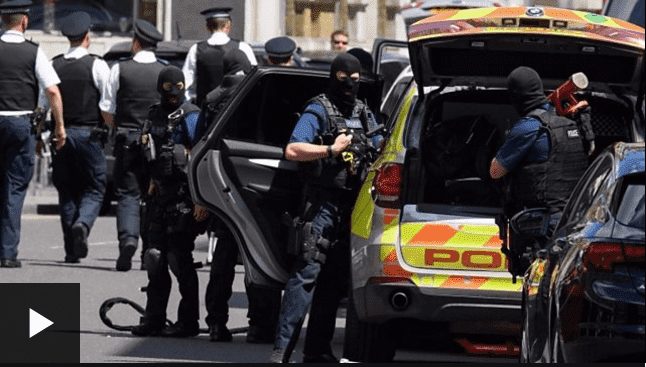 BBC reoports, Twelve people have been arrested after the London terror attack which left seven people dead and 48 injured.
The arrests in Barking, east London, followed a raid at a flat belonging to one of the three attackers.
A van hit pedestrians on London Bridge at 21:58 BST on Saturday. Three men then got out and stabbed people in nearby Borough Market.
The attackers were shot dead by eight officers who fired 50 bullets. A member of the public was accidentally shot.
The member of the public remains in hospital in a non-critical condition, Assistant Commissioner Mark Rowley said.
“The situation these officers were confronted with was critical, a matter of life and death – three armed men wearing what appeared to be suicide belts,” he said.
“They had already attacked and killed members of the public and had to be stopped immediately.”
The suspected suicide vests were later found to be hoaxes.

Thirty-six people are in hospital with a “range of injuries”, he said, and 21 are in a critical condition.
Controlled explosions were carried out at the flat in Barking during the raids on Sunday morning.
According to neighbours, the dead attacker lived there for about three years and was married with two children.
It is the third terror attack in the UK in three months, following the car and knife attack in Westminster in March, in which five people were killed, and the Manchester bombing less than two weeks ago, in which 22 people were killed.
Most political parties have suspended national general election campaigning, but the prime minister said full campaigning would resume on Monday.
The general election will go ahead as planned on Thursday.
Condemning the attack, Theresa May said it was “time to say enough is enough”.
Hire van
Eyewitnesses described a van travelling at high speed along London Bridge, hitting pedestrians, before crashing close to the Barrowboy and Banker pub.
The white Renault van used was recently hired by one of the attackers, Mr Rowley said.
Three men then got out wearing fake bomb vests and began attacking people in the nearby market – an area known for its bars and restaurants.
Four police officers who tried to stop the attack were among those injured, two of them seriously.
One of them was an off-duty officer and amateur rugby player who tackled one of the terrorists, suffering stab wounds.
Another, a British Transport Police officer who joined the force less than two years ago, took on the attackers armed with only his baton.
Metropolitan Police Commissioner Cressida Dick praised their “extraordinary bravery”.
The three suspects were shot dead within eight minutes of the first 999 call being received.