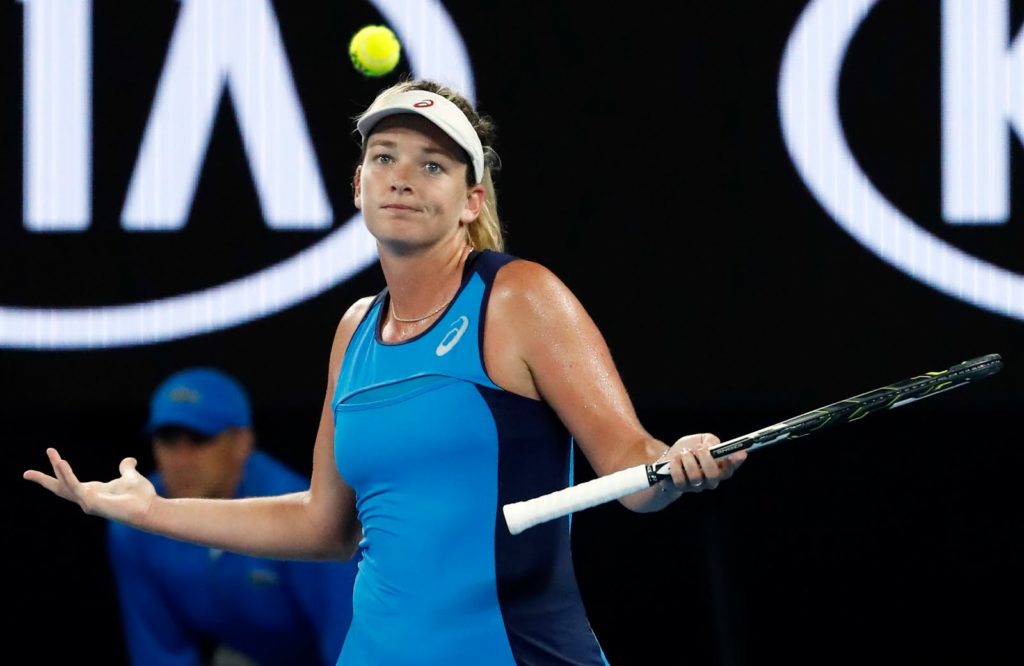 Under a barrage of power serving from the American Coco Vandeweghe, Britain’s number one Johanna Konta was blasted out of the Aegon Classic at Birmingham on Thursday night.

After reaching the final at Nottingham, Konta was hoping for an extended run-in to Wimbledon. Instead the number four seed here was pummelled off court 6-2, 6-3 in just over an hour by a woman ranked 23 places below her in the WTA rankings.

“I did a reasonable job at trying to do the best I could but it was no-where good enough,” Konta said.

“It is part of the game. Just because I am number seven in the world doesn’t mean I am entitled to win every match.”

The two players may have been wearing exactly the same red and blue striped outfit, but there was no mistaking who was mainlining proper form.
With her new coach Pat Cash watching on, the American had arrived in Birmingham full of confidence, as befits a semi-finalist at this year’s Australian Open, where she was beaten only by Venus Williams.

And the statuesque Vandeweghe (her grandfather played for the New York Knicks which gives genetic explanation for her basketball player physique) started with a flourish.

Serving down 120mph howitzers, she quickly opened up a lead. It was, however, her forehand return that left Britain’s great Wimbledon hope flat footed and marooned, her service broken twice before she had even had time to get used to the capricious light.

Konta was down 5-0 within 16 minutes. A brief flurry in the sixth game of the set created some ripples of anticipation in the crowd. But it was a forlorn hope.

The American had taken the first set 6-1 before Konta had caught her breath.  After the American’s assault and battery of a first set, the Briton did recover some of her poise at the opening of the second.

Her methodical, schooled approach to service – the careful bounce of the ball, the deliberate outtake of breath before the slow, upward reach – looked as if it might pay dividends. Her placing seemed to return. But Vandeweghe was not easily dislodged.

Charging to the net, blocking out all her opponent’s available light, she continued to pummel the ball back at the Briton’s feet, finally dismantling her resistance with a service break in the seventh game of the second set.  From there, it was a procession.

Konta, pensive in the break between games, tried to steal herself for a dramatic revival, skipping back on to court full of vigour and insistence. But Vandeweghe simply hammered a couple of unplayable services into the backboards and eased away over the horizon, provoking a grin of anticipation across her coach’s face.

Vandeweghe now plays Garbine Muguruza in the next round. Konta, meanwhile, will have to seek practice for Wimbledon elsewhere.

Though she tried to remain upbeat, suggesting the defeat had not significantly fouled up her plans.  “I played five great matches last weekend a good first round here. Me losing against a player who is very good on this surface is by no means a blow.”

Violette - November 10, 2019 0
Nigeria singer and songwriter, Chidinma Ekile simply known as Chidinma has woke up her followers on Instagram with a cleavage revealing night gown. The singer...

Ka3na succumbs to pressure, ask fan with a tattoo of her name to reach...

Violette - February 26, 2021 0
Former Big Brother Naija housemate Ka3na had finally succumbed to pressure from fans and followers on social media as she asks her die-hard fan...

Violette - November 13, 2020 0
Veteran singer and songwriter, Brymo have continue his attack on some of the artiste in the music industry as he claims some of them...