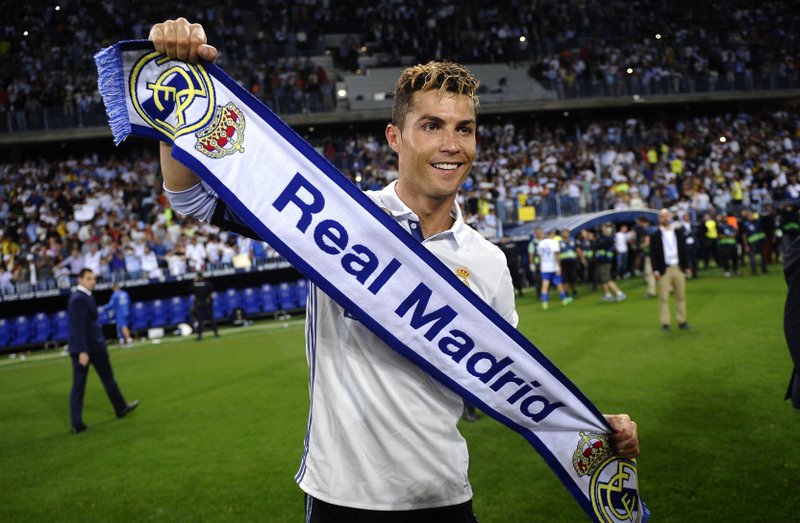 FILE – In this Sunday, May 21, 2017 file photo, Real Madrid’s Cristiano Ronaldo celebrates after winning a Spanish La Liga soccer match between Malaga and Real Madrid in Malaga, Spain.A Spanish judge has summoned Real Madrid forward Cristiano Ronaldo to court to answer questions after he was accused of tax fraud by a state prosecutor.(AP Photo/Daniel Tejedor, File)

BARCELONA, Spain (AP) — Cristiano Ronaldo has been summoned to appear before a Spanish judge, and Jose Mourinho could be next.

Ronaldo and Mourinho are the latest members of the soccer elite to be accused of tax fraud in Spain. Lionel Messi and Javier Mascherano, among others, have already been convicted.

On Tuesday, Ronaldo was told to appear in court on July 31, while Mourinho was accused by a state prosecutor of defrauding Spain’s Tax Office of 3.3 million euros ($3.7 million).

Ronaldo, who is in Russia at the Confederations Cup playing for Portugal, has played in Spain for Real Madrid since 2009.

The cases are about the profits made from image rights, not salaries from their clubs. Real Madrid and Man United are not directly involved.

Both Ronaldo and Mourinho are represented by Portuguese agent Jorge Mendes. Atletico Madrid striker Radamel Falcao and Real Madrid defender Fabio Coentrao, who have also been accused of tax fraud in Spain, are also clients of Mendes.

Mendes’ agency, Gestifute, released a statement saying Mourinho had not received any official notification about the accusations against him.

“To this date, neither the Spanish tax authorities, nor the public prosecutor have contacted Jose Mourinho or his advisers who were hired for the inspection process,” the statement said.

It added that Mourinho paid “more than 26 million euros in taxes, with an average tax rate over 41 percent, and accepted the regularization proposals made by the Spanish tax authorities in 2015 regarding the years of 2011 and 2012 and entered into a settlement agreement regarding 2013.”

The statement said that the Spanish government, through tax authorities, “issued a certificate in which it attested that he had regularized his position and was in compliance with all his tax obligations.”

The agency published copies of the certificates.

Last week, Ronaldo was accused by a state prosecutor of four counts of tax fraud totaling 14.7 million euros ($16.5 million). He is under official investigation and will have to appear in the Pozuelo de Alarcon court No. 1 on July 31. A judge will then decide if they are grounds to charge him with a crime.

The prosecutor said last Tuesday that there was evidence that Ronaldo used a shell company in the Virgin Islands to hide the money he made from image rights.

Ronaldo has denied any wrongdoing.

The accusations against Ronaldo have caused speculation in Portugal and Spain that he is considering leaving the country to play elsewhere.

A statement issued by the section for economic crimes of Madrid’s provincial state prosecutor’s office said its investigations indicated that Mourinho committed tax fraud in 2011 and 2012.

The prosecutor based the accusations on information provided by Spain’s Tax Office, which appear to show that Mourinho used shell companies in the Virgin Islands and Ireland to “hide profits made from image rights.”

It will be up to a judge to decide whether to take Mourinho to court.

Last year, Messi and his father, Jorge Horacio Messi, were found guilty on three counts of defrauding tax authorities of 4.1 million euros ($4.6 million) from income made from image rights.

The two were given 21-month jail sentences but neither is expected to serve prison time since it was a first offense and the sentence was under two years.

Mascherano was also convicted of tax fraud last year and was given a suspended one-year sentence.