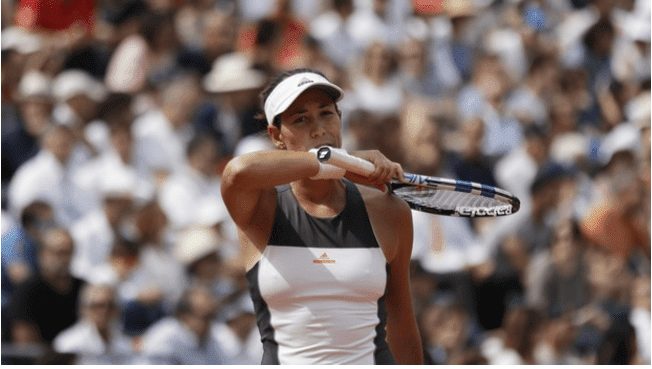 BIRMINGHAM, England (AP) — Garbine Muguruza, trying to find good times in tennis again after conceding her French Open title in the last 16, barely survived her first grass match of the season at the Aegon Classic on Tuesday.


The fifth-seeded Muguruza frequently had to abandon her elegant game and scramble to stay in the rallies during a 6-3, 3-6, 6-4 win against Elizaveta Kulichkova, a Russian qualifier who hit the ball with a complete absence of inhibition.

“I often felt like a rookie,” Muguruza said. “It was my first match on grass, and she had played three times in the qualifying and was extremely aggressive.


“I just somehow had to figure it out. I didn’t know I was going to win until the last moment.”


That was because when the former Wimbledon finalist was serving for the match at 5-3 in the final set Kulichkova hit more unstoppable flat groundstrokes and earned a chance to serve for 5-5.


When it really mattered, Muguruza still found enough rhythm to break down the Russian’s spectacular attack, and to help her take her first step away from her Paris sorrows.


“It isn’t easy when a Grand Slam doesn’t end as you want,” she said. “I took four or five days off, and now I want to keep going for the year. I want to start afresh.”


She will continue to try to do that in the second round against Alison Riske, a top-50 American who thrives on grass and is a former semifinalist here.


Kvitova only recently returned to action after being injured in a knife attack at her home last year, playing two matches on clay at the French Open.


“For the first match on grass it was pretty good,” she said. “I served well, and played some good shots from the baseline, and it was good timing on the court today.


“I have made no change to the way I play. We have still been worrying about it (the injury) so I still have days off, to remind us to be careful,” she added, referring to her support team.


Her path has been smoothed by the exit of another top-10 player in her half, after third-seeded Dominika Cibulkova failed to convert two second-set match points and lost 5-7, 7-6 (7), 7-5 to Lucie Safarova, the former top-10 Czech.


Cibulkova also led 4-2 in the final set, but Safarova finished physically the stronger, with the hard-running Cibulkova making three groundstroke errors in her final service game which cost her the match.