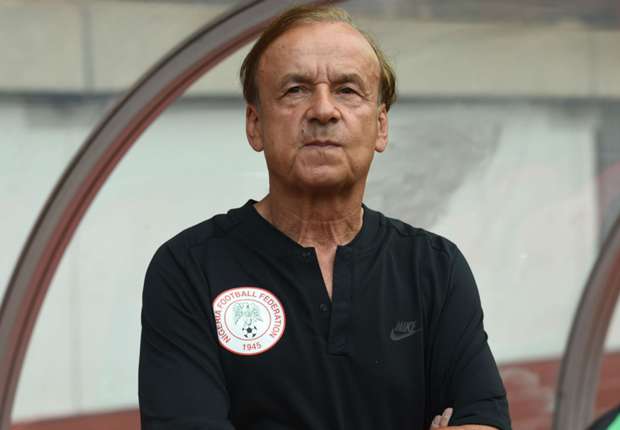 The Super Eagles of Nigeria where a shadow of themselves over the weekend as they lost ther AFCOn Qualifier first match to Bafana Bafana of South Africa on Home soil 2-0,a result that has sparked reactions across the nation.

According to Goal, Gernot Rohr will face strict scrutiny over the invitation of players to the senior national team following a 2-0 defeat to South Africa in Saturday’s Africa Cup of Nations qualifier.
Having lost the Afcon 2019 qualifying opener to Bafana Bafana in Uyo, the German tactician was summoned by the Nigeria Football Federation technical committee to an emergency meeting in Abuja.
Chairman, NFF technical committee Barrister Chris Green disclosed that Rohr, who had enjoyed no technical interference in charge since August 2016, will have his activities undergo thorough scrutiny from the football body’s technical department.
“We had an emergency meeting to look at all that went wrong and reviewed Bafana Bafana loss,” Green told Goal after Tuesday’s emergency meeting.
“We discussed from match ball, tactics deployed, the fitness of players, organisation of the team and all what’s not. And at the end of the day, we made recommendations to the board.
“We called for the establishment of the scouting unit in the technical department and that henceforth, we should have a pre-knowledge of players invited before sending to the public.
“The technical adviser must appear at a press conference where such list will be announced to the public and questions will be asked as regards the list. And there must be a good synergy between the technical crew and technical department cum the committee.
“We have resolved that certain persons will be deployed to observe training and all sort of things going on in the team. We also asked that only players playing regularly for their clubs should be invited to the national team.
“There will be redeployment of a psychologist to the team. We believe the players need to be psyched up for matches as we will face Cameroon which will be a very tough game.”

Johnson Olumide - February 17, 2020 0
The Mother Of two kids and also the Brain behind her fashion and stylist label wore this Custom made Swarovski stones bikini in continuous...

Violette - December 4, 2019 0
Celebrity couple, Simi and Adekunle Gold have set the social media world on it's toe after they engage in a thread which also involves...

Violette - July 20, 2020 0
Popular Nigerian comedian, Seyi Law has shown support for the 28-year-old Praise who is one of the newest Big Brother Naija Housemate. The comedian made...

Johnson Olumide - March 16, 2021 0
Its been over a week since the tragic and fatal death of Barry Jhay's Record Label Boss, Kashy Godson who fell from the third...