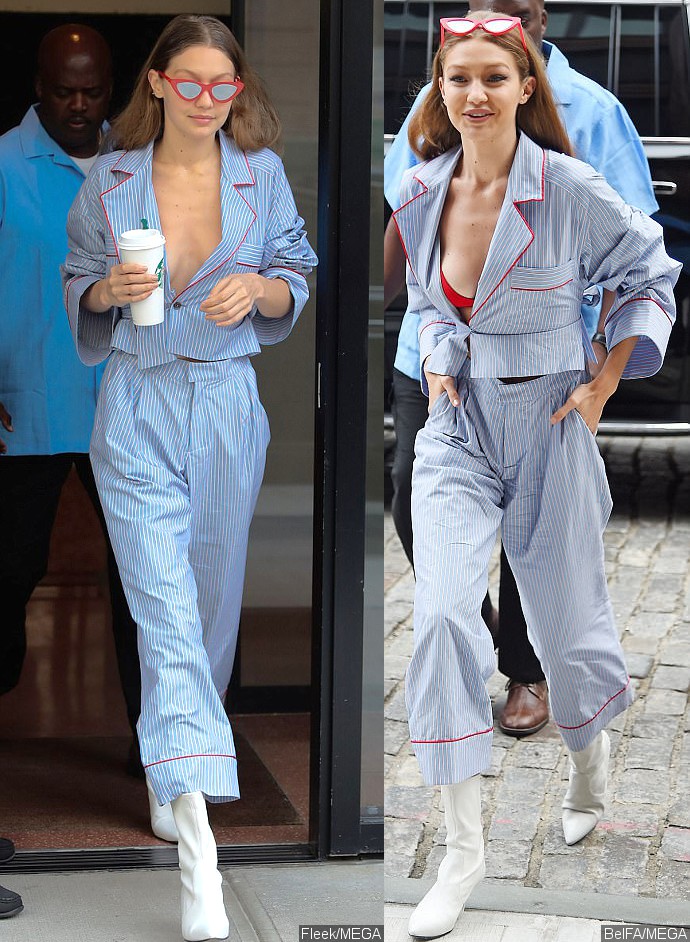 Gigi Hadid seemingly loves going braless. After flaunting her nipples in a white crop top last week, the girlfriend of Zayn Malik risked wardrobe malfunction as she ditched her bra again while heading out from her apartment in New York City on Friday, June 23.

The 22-year-old model was wearing a blue-and-white striped jumpsuit that resembled pajamas. Gigi almost spilled out of the outfit as it barely covered her breasts. She completed her look with a pair of red sunglasses and white stiletto boots.


Gigi seemed to realize that she nearly exposed her nipple since she was later seen wearing a red bra underneath her jumpsuit. The older sister of Bella Hadid looked in high spirits as she was smiling while walking toward a building.

Later that day, Gigi took to Instagram to share a photo from her latest photoshoot. Still donning the same outfit, she looked stunning as she sat down on a sofa while striking a fierce pose for the camera. “@lilmami_lani’s afternoon creation ft. #DonBlanding’s ‘Lady of the Night’ #ilovenaps,” Gigi wrote in the caption.

She also posted a video of her sporting a Snapchat filter while showing off her flawless makeup. She captioned it, “Feelin it @maybelline @erinparsonsmakeup @brycescarlett.”

Although she appeared to enjoy the day, Gigi was still lonely without her boyfriend. She shared a throwback photo of her leaning her forehead on Zayn’s temple. “Missing mine,” she captioned the photo, along with a smile emoji.

Her Sister used to date the Weekend a while back, before they broke up late last year due to busy career schedules. Few months later it broke in the news that Bella’s ex BF the Weeknd was already dating Selena Gomez.

This article originally
ran on   AceShowbiz.com