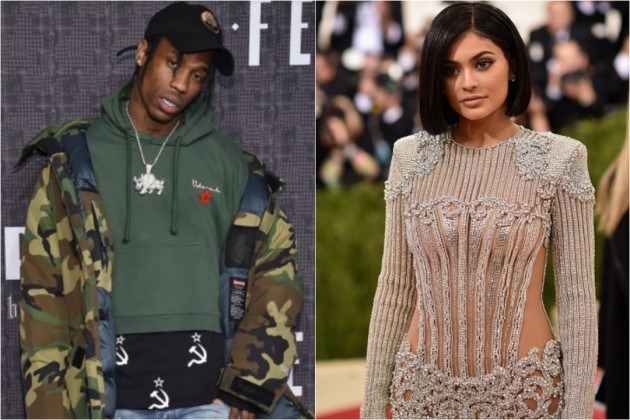 Its been Barely three months since this two love birds have been together and they really have taken their relationship to the next level by having same tattoo done on te angle of their left leg.

According to Gistflick, Today, the rapper took to his social media to share the photo of his latest tattoo which matches a similar one that Kylie posted on her Snap on Monday.

And this heartwarming display comes just days after the duo packed on the PDA outside the rapper’s Los Angeles home.

This development has stirred mixed reactions from fans of the rapper who previously dated Rihanna.

While some are impressed with his dedication to youngster who made debut on Forbes list yesterday, others are upset that the rapper inked his skin for the young Jenner.

And this brings to mind the memory of that time in 2015, when Tyga tattooed Kylie’s name on his elbow.

“Dam Tyga got her whole name tatted on him now travis got a matching tattoo?these niggas in love,” said one fan, and another added painfully, “They just met yesterday and she got a grown ass man to get a butterfly on the back of his ankle.”

LOL. Haters be trying to spoil their fun!

Meanwhile, Kylie and Travis continue to stick together, and we must agree: we love them together.
READ ALSO
Ini Edo staggering in white and gold outfit

I’m not stupid’ – Conte responds to ‘crime against football’ jibe

Violette - March 5, 2018 0
Antonio Conte responded to the claim Chelsea committed "a crime against football" with their display against Manchester City by stating that an attacking approach...

How to make long distance relationships work without drama

Johnson Olumide - October 13, 2017 0
Knowing how to make long distance relationships work is essential if you end up with someone who lives far away. Here’s what to do...

Johnson Olumide - February 17, 2020 0
Some Days ago, Tragedy Struck in the most unfamiliar location in Lagos Known as Lekki a place where the High and mighty of the society Lives and...

Johnson Olumide - September 20, 2017 0
The rumors about John Legend and Chrissy Teigen’s marrige being in trouble might be true. Recall InTouch Magazine reported last week that the couple’s marriage...

Johnson Olumide - December 28, 2018 0
A Ghanaian slay queen has gone viral on social media after she shared a video of herself openly invited men to come have her...