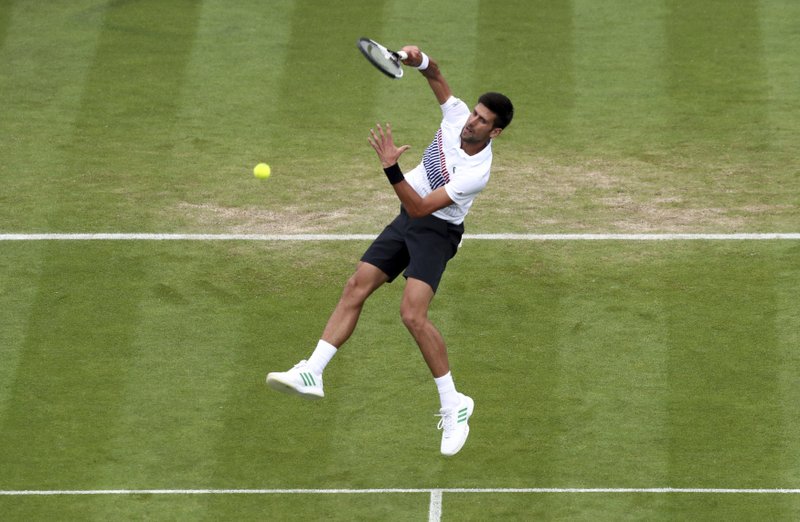 EASTBOURNE, England (AP) — Novak Djokovic advanced to his third final of 2017 by beating Daniil Medvedev 6-4, 6-4 on Friday at the Eastbourne International, an event that is proving the ideal preparation for Wimbledon for the former No. 1.

The top-seeded Djokovic, who will take on second-seeded Gael Monfils for the title, has not dropped a set in three matches at the grass-court tournament, which he is playing for the first time in a bid to rediscover some form amid a disappointing season.

Like in his previous matches this week on England’s south coast, Djokovic mixed periods of quality with sloppiness to underline that he is still short top form heading to the All England Club.

However, at least the fourth-ranked Serb is in good spirits.

Near the end of the match, seagulls overheard were making loud squawking noises. Djokovic paused, looked up and said: “We hear you,” drawing laughter from the crowd as a smile cracked over his face.

“I actually love seagulls,” Djokovic said after the match.

He sealed victory on his second match point, when Medvedev could only return his second serve into the net.

In a well-contested first set, the former No. 1 exchanged early breaks with the 21-year-old Medvedev and clawed his way back from 0-40 to stay on serve at one point. Djokovic made fewer errors in the second set, which he took on his third match point when his Russian opponent sent a forehand return into the net.

Djokovic, who has relinquished all four of the grand-slam titles that he owned after last year’s French Open, won the Qatar Open in January in his first event of 2017 but his only other final since was in Rome, where he lost to Alexander Zverev in straight sets in May.

Monfils squandered three match points in the second set before winning an all-French semifinal against Richard Gasquet 6-2, 6-7 (7), 7-6 (4). Monfils finished the match with strapping on his left leg after appearing to twist his knee when he slipped just after serving late in the second set.

He finally secured victory with a strong serve that Gasquet returned long at full stretch, improving to 9-7 against Gasquet in their career meetings.

“It was very tough mentally. I twisted my knee a bit and he saved some match points,” Monfils said, adding that he still felt pain in his knee at the end. “Right now it’s a little bit painful. Hopefully it will be better tomorrow, it’s tough to say.”

It looked like Monfils may have to quit after losing the tiebreaker but he continued following a second round of treatment.

Djokovic has won all 13 of his ATP matches against Monfils, although they have never played on grass.

In the women’s tournament, Caroline Wozniacki played through an abdominal injury to beat Heather Watson 6-2, 3-6, 7-5 and advance to a final against Karolina Pliskova, who got a walkover after Johanna Konta pulled out of their semifinal match because of a spine injury.

The seventh-ranked Konta had a hard fall near the end of her win over top-ranked Angelique Kerber in the quarterfinals on Thursday. It jeopardizes Konta’s participation at Wimbledon, where she is seeded No. 6 and was drawn to play Su-Wei Hsieh in the first round on Monday.

“We made the decision based on the fact I’m still quite sore through my thoracic spine,” the British player said.

“I didn’t sleep too well but I heard that’s normal. It just didn’t feel quite right. The most important thing is I rest well for the next 24 hours and then we’ll see.”

Many fans would have arrived at Eastbourne hoping for Konta and Watson to set up an all-British final. In the end, neither made it.

Wozniacki got pegged back by Watson, ranked No. 126, after comfortably taking the first set and needed treatment while trailing 5-2 in the second set.

The sixth-seeded Dane’s big-match experience told in the key moments of the third set, and she reached her fourth final of the year when Watson netted a forehand on Wozniacki’s second match point.

Wozniacki, the 2009 champion at Eastbourne, said playing back-to-back matches Thursday — as organizers played catch-up with the schedule after rain delays early in the week — contributed to her injury.