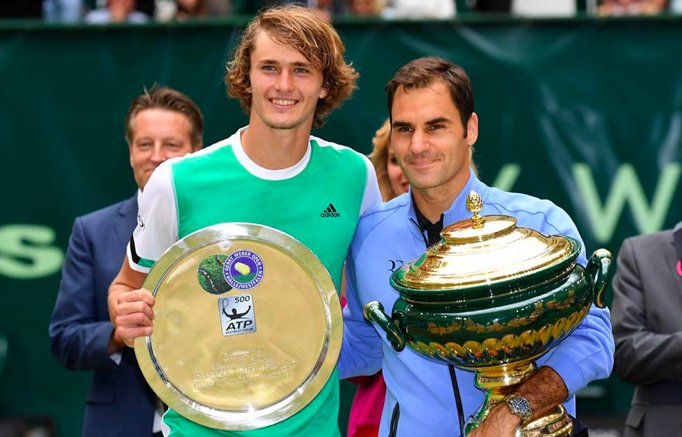 Playing in his 140th career final, Federer saved the only break point he faced and converted four of his eight opportunities to clinch his 92nd career title in 53 minutes. At 35, the Swiss player became the oldest winner of the grass-court tournament.

“I played unbelievably well. I felt good and never let up,” said Federer, who dropped just nine points on his serve. “It was my best game this week. Nearly everything worked out for me.”

Federer, who skipped the clay-court season after winning the Miami Open in early April, claimed his fourth title of the year, matching Rafael Nadal’s tally, and he will be seeded ahead of his Spanish rival for Wimbledon, which starts in eight days.

Federer had already won the Australian Open before titles in Indian Wells and Miami in 2017.

The 18-time Grand Slam champion was surprised by German veteran Tommy Haas on his return from the two-month break last week in Stuttgart but brushed off any doubts over his form in Halle.

Against the 20-year-old Zverev, who lost last year’s final to Florian Mayer, Federer raced to a 4-0 lead before wrapping up the first set in 22 minutes. Zverev created his only break chance in the opening game of the second, but ultimately was unable to show why he is regarded as one of the sport’s brightest prospects.

“You could have been a bit nicer and allowed me a couple more points,” Zverev joked to his idol.

Federer had words of affection for Zverev, who won their semifinal in Halle last year.

“He’s a very nice lad. I’m very happy for him, how he’s developed in the last years. The future belongs to him,” Federer said.

#BBNaijaReunion: “The truth is that we were never gonna work out” – Diane on...

Joel Adesina - July 8, 2020 0
There is no way the house will not be filled with a series of drama. And as the reunion is about ending, you will...

Toke Makinwa reacts to fans calling her ‘insensitive’ for her opinions

Adedokun Moses - March 31, 2020 0
Media Personality and vlogger, Toke Makinwa reacts to being called insensitive for saying China should be fined for the Coronavirus pandemic. Recall that the pandemic...

‘Be patient with your body’ Korra Obidi, as she shows off her Konto dance...

Violette - November 10, 2019 0
Being a mother is truly a journey of one step at a time and after birth another journey begins cause many mother don't actually...

Nigerian youths urge Pius Anyim to run for the presidency

Johnson Olumide - December 8, 2020 0
Call him a leader who juxtaposes the quality service to the people and an unwavering dedication to making Nigeria great again, and you will...

I’m not cheap, I charge close to $10K per show- Fameye brags

Violette - August 12, 2019 0
The ‘Notin I get’ hitmaker is obviously getting something lately. Ghanaian Singer and Rapper, Fameye has debunked claims that he is cheap to afford...