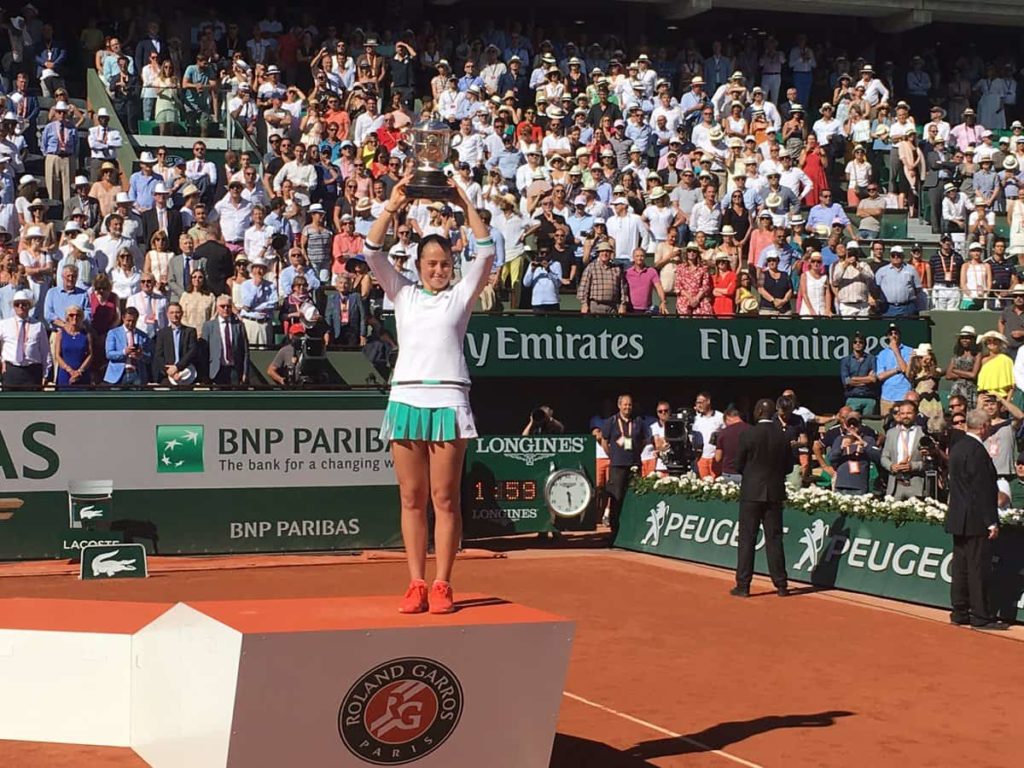 PARIS (AP) — Unseeded Jelena Ostapenko of Latvia used bold strokes and an unbending will to come back and stun No. 3 Simona Halep 4-6, 6-4, 6-3 in an enthralling French Open final Saturday for the first title of her career.

Ostapenko, ranked only 47th and just two days past her 20th birthday, became one of the most unlikely Grand Slam champions in tennis history. She also denied Halep what would have been her first major championship and the No. 1 ranking.

Halep appeared on the way to a relative runaway, leading by a set and 3-0 in the second, then holding three break points for the chance to go ahead 4-0. But Ostapenko would not go quietly, winning that game and the next three en route to forcing a third set.

And then, in the third, Ostapenko again summoned a veteran’s resolve, taking the last five games after being down a break at 3-1. She took advantage of a bit of luck, too, holding for a 5-3 lead when she hit a backhand that clipped the top of the net, popped way up in the air, then dropped over onto Halep’s side.


Alvaro Morata Moves to Manchester United for £64million , as he seeks to make Spain’s World Cup

It was a match filled with wild momentum swings between two players displaying completely disparate styles: Ostapenko’s grip-it-and-rip-it approach vs. Halep’s more conservative keep-the-ball-in philosophy. By the end, the numbers were stark: Ostapenko built a 54-8 edge in winners, but she also had far more unforced errors than Halep, 54-10.

“I really enjoy to play here. It’s a really great time, I really love to be he.re”

Halep, a 25-year-old from Romania, was playing in her second major final. She was the runner-up to Maria Sharapova at Roland Garros in 2014.

Ostapenko was playing in only her eighth Grand Slam tournament, never having been past the third round before. She also had never before won a tour-level title of any sort. The last woman to win her first title at a major was Barbara Jordan at the 1979 Australian Open.

Not coincidentally, that was also the last time at any Grand Slam tournament that none of the women’s quarterfinalists had previously won a major championship.

So Ostapenko stepped into the considerable opening created by the absences of Serena Williams (she’s taking the rest of the season off because she is pregnant) and Sharapova (denied a wild card after coming back from a 15-month drug ban). Also missing from the tournament was two-time major champ Victoria Azarenka (slated to return soon after having a baby), while current No. 1 Angelique Kerber lost in the first round in Paris.

That all added up to an up-for-grabs feeling, and Ostapenko seized the opportunity.