Home News Venus Williams’ publicist says She Will be Playing at Wimbledon, Despite Latest... 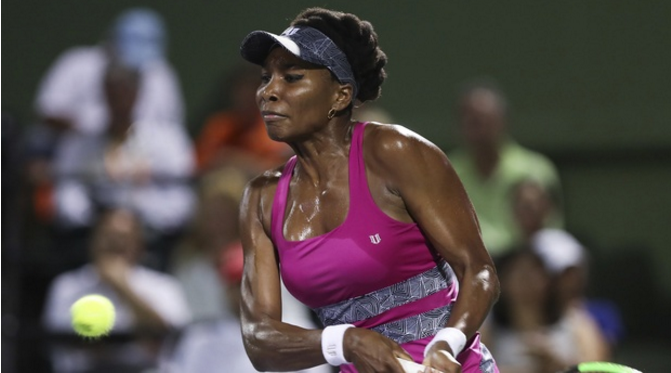 LONDON (AP) — Venus Williams’ publicist says the five-time Wimbledon champion will play at the Grand Slam tournament after a police report emerged in Florida saying the tennis star caused a car crash that led to the death of a passenger in another vehicle.

Stephanie Jones confirmed in an email to The Associated Press on Friday that Williams is in London, where the year’s third major tennis tournament begins Monday.

In Friday’s draw at the All England Club, the 37-year-old American was set up to play Elise Mertens of Belgium in the first round.

Williams, who had lost in the fourth round of the French Open in Paris on June 4, told investigators she had entered the six-lane intersection on a green light but had been forced to stop midpoint by traffic ahead of her. She said she did not see the Barsons’ car when she crossed into their lanes.

Palm Beach Gardens Maj. Paul Rogers said the crash remains under investigation. Williams, who has a residence in Palm Beach Gardens, has not been cited or charged. The police report , released to the AP on Thursday, said Williams was not under the influence of drugs or alcohol.

The report says a 2016 Hyundai Accent driven by Barson’s wife, Linda, crashed into the side of Williams’ SUV. Linda Barson told investigators that she was approaching the intersection when her light turned green and that she was unable to stop in time. Linda Barson suffered unspecified moderate injuries. Williams was not hurt.

An attorney for Williams, Malcolm Cunningham, said in a statement on Thursday that Williams expressed “her deepest condolences to the family who lost a loved one.”

Williams is a former No. 1-ranked player who owns a total of seven Grand Slam singles championships, including two at the U.S. Open in 2000 and 2001, along with 14 Grand Slam doubles titles, all won with her younger sister, Serena.

Since revealing in 2011 that she had been diagnosed with Sjongren’s syndrome, which can cause joint pain and fatigue, Williams had a half-dozen losses in the first round at major tournaments, raising questions about whether she might consider retirement.

But a year ago at Wimbledon, at age 36, Venus Williams became the oldest woman in the semifinals at a major since 1994.

She continued her resurgence at the Australian Open this January, making it all the way to the final before losing to Serena, who earned her 23rd Grand Slam singles trophy.