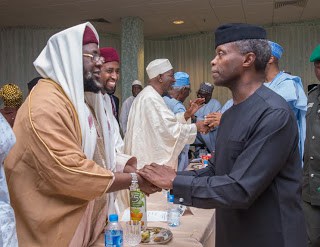 Acting President Yemi Osinbajo, SAN, has warned those persons promoting hate speeches or making pronouncements that can cause violence or disruption of lives and property in the country, to desist from such divisive behavior or face the full wrath of the law.

The Acting President gave the warning Yesterday in Abuja at the beginning of a series of consultative meetings he is holding this week with Leaders of Thought from the North and South-East parts of the country.

Today’s meeting being the first in the series was with a cross section of leaders from Northern states at the Old Banquet Hall in the State House.

First let me say how honoured I am, by your response to my invitation to attend this special consultation.

I’m pleased to welcome all who are here today, cross-section of elders from the Northern states of Nigeria. It is also important to point out that there are, of course people who would qualify for the same description, the description of very respected thought leaders, but certainly, we cannot have everyone.

Some we could not even reach but, more importantly we wanted to have a small number of people for this first consultation, so that we will not have an unwieldy number.

So this will be very broad series of consultations but, let me say again that I am extremely grateful that you responded to this meeting at very short notice.

Living in a diverse country such as ours of course as most of us who are here know, is one that will give rise to unique challenges, several challenges and several issues. Most, who are here today have been witnesses to practically all phases of Nigerian History which, is one of the reasons we have asked that you come today.

There is hardly anyone here who has not witnessed the most important landmarks in our history, some tragic, some joyful and, many times unable to put together.

This is one of the reasons why I thought that, this particular group of people are important to be here today.

In the past few weeks, I’m sure many of us have noticed that there have been louder noises of hate, of division, especially from the younger persons in our society. Much louder noises than perhaps had been the case in the past.

Recently of course there was the loud agitations about secession from some of the groups of some young people in the South-East, IPOB and groups that are affiliated with them but also and perhaps more recently, the call by a group of young persons from the North, who claim to have given an ultimatum to all of those who are from the South-East who live in the North to vacate the North by October 1st, 2017.

Now, there are those who may deride these sort of statements that these hate speeches that may show intolerance and promote divisions are not important, that they should be ignored.

However, I believe that we should address them quickly and that especially leaders of thoughts and elders, persons with experience, persons who have been through several phases of Nigeria’s history should be able to advice and should be able to give some directions as to how many of those in our midst, especially younger people in our midst who may believe that perhaps the way and means they are going about their frustrations or their personal grievances is the right way to go.

Every form of violence, every form of hate speech, every stone that is thrown in the market place will hit targets that are not even intended. And I believe that the Nigerian people must be made very conscious of that, so that we do not create a crisis that is un-intended.

As part of the reasons of living together, we must know that misunderstandings and frustrations would always arise and that people would always complain that they are not getting the best part of the deal. But we must be careful to recognize that we can only even begin to talk about getting any part of anything (only) if we are together in peace.

These days, wars do not end and I am sure that all of those who have seen or experienced war in any form would not wish it on their worst enemies. This is not the time to retreat behind ethnic lines.

Moments like this are not for isolating ourselves and I want to urge all of us who are here, and of cause the entire Nigerian populace, that it is a time for us to come together and to work together.

As a government, we are of cause determined to ensure the unity of the country along the lines of our constitution.
I want to say that hate or divisive speech, or divisive behaviour, where it is illegal, will be met with the full force of the law.

Especially because when we make these kinds of pronouncements and we do things that can cause violence or disruption of lives and property, those who make those speeches are no longer in control.

So, I want to just emphasise that government will take very seriously any attempts to cause violence or to disrupt the peace of this country. That, I think is very important because we cannot control violence once it begins.

So today I am extremely grateful that you have responded to this meeting and I know that those who are around this table will be frank and constructive in all of our engagements. It is a very important engagement and I hope we will be able to get the kinds of fruit that we desire from it.

Thank you very much.

Laolu Akande
Senior Special Assistant to the President (Media & Publicity)
Office of the Acting President
13th June, 2017
PHOTOS BY: NOVO ISIORO
READ ALSO
‘I Had No Idea’ I Was Having a Boy-Kerry Washington

Golden State Warriors on Cruise Control as they take Game 3 to beat the...

Johnson Olumide - October 27, 2018 0
Ghanaian actress and television personality Efia Odo has opened up about her social life, stating that she is not as sociable as many believe...

Johnson Olumide - May 10, 2018 0
Singer Mr P, has been dragged into a hot social media mess by an aspiring music star who goes by the name, Henry Knight. The...

Johnson Olumide - April 14, 2018 0
Ghanaian actress, Moesha Boduong has stated in an interview with CNN’s Amanpour that Ghanaian women depend on men to pay their bills due to...

Black Panther crosses $1billion worldwide, becoming the 33rd movie to do so