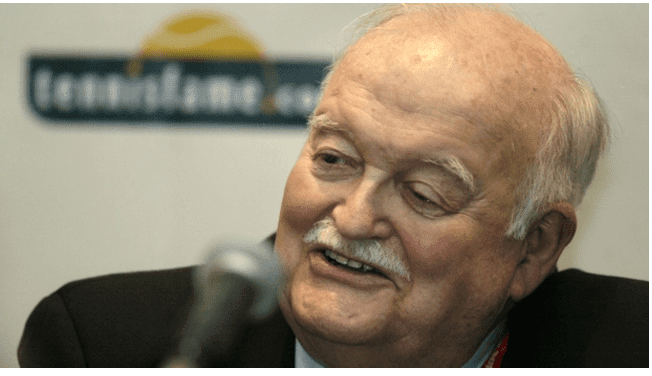 NEWPORT, R.I. (AP) — Acclaimed tennis photographer Russ Adams has died after chronicling the sport for more than 50 years. He was 86.

The International Tennis Hall of Fame said he died Friday. Adams was inducted into the Hall in 2007.

He was known as the dean of modern tennis photography, spanning the eras of black and white to color, film to digital. He was a presence at Grand Slam tournaments as well as the Davis Cup, Fed Cup and Olympics.


READ ALSO- Serena Williams Covers Vanity Fair Magazine August Issue Nude with her Baby Bump
Adams worked for newspapers in Massachusetts and photographed such Boston luminaries as Ted Williams, Bobby Orr and Bill Russell. In 1955, he was nominated for a Pulitzer Prize. He was presented with the U.S. Tennis Association’s lifetime achievement award in 2002.

His wife, Betty, who traveled the tennis circuit with him, died June 5. They are survived by son Richard Adams and two grandsons.

‘A woman is to be loved- Wizkid Makes Cryptic Post Amid Rumor Dating Tiwa...

Johnson Olumide - May 14, 2018 0
Popular Nigerian musician, Wizkid has shared a rather cryptic message on social media concerning women. The star appears to be shaking a table, and...

BBNAIJA: I have Said My Peace- Cindy as she drops videos Explaining Her Part...

Violette - November 10, 2019 0
former bbnaija house mate has take. to her Instagram page to post videos explaining her own part of The Whole story to her fans...

“You don’t owe your parents anything” – Media Personality, Noble Igwe