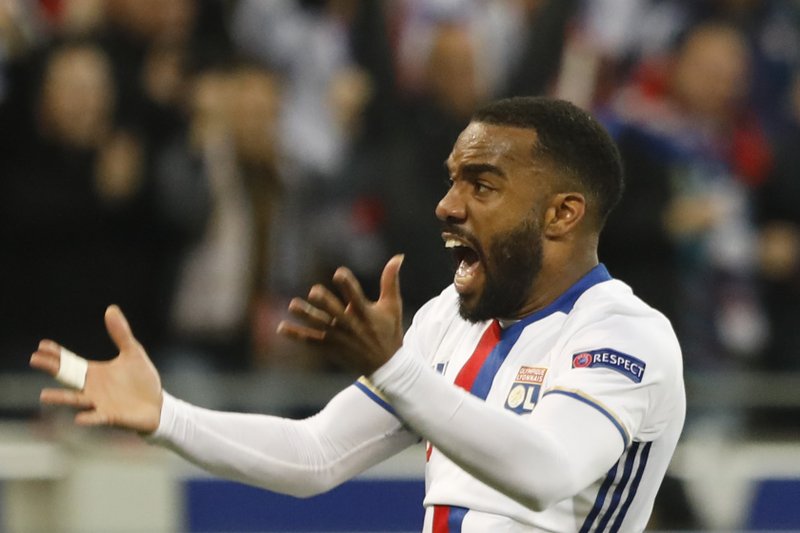 Arsenal signaled its intention to make an immediate return to the Premier League’s elite by paying a club record 60 million euros ($68 million) to sign Lyon striker Alexandre Lacazette, one of Europe’s most prolific players in recent years.

Arsenal said on its website Wednesday that the 26-year-old Lacazette “has agreed to join us on a long-term contract, for an undisclosed fee.”

However, Lyon confirmed the figure of 60 million euros in a statement, with the amount exceeding the estimated 50 million euros that Arsenal paid to Real Madrid for playmaker Mesut Ozil in 2013.

Arsenal said Lacazette is expected to travel with the tour party to Sydney this weekend and will likely make his home debut in the Emirates Cup on July 29 or July 30.

“I am of course delighted and very proud too because Arsenal is a legendary club,” Lacazette told the club’s website. “Throughout my childhood, thanks to Thierry Henry and other French players, I always dreamed of playing for this club so today that dream has been fulfilled.

“Arsenal is also the club which plays the best football in England, so I really wanted to come here.”

Lacazette had two years remaining on his Lyon contract but made it clear he wanted to leave after the seven-time French champions failed to qualify for the Champions League. He was expected to join Atletico Madrid but the move fell through after the Spanish club’s transfer ban was upheld by the Court of Arbitration for Sport last month.

Ironically, Arsenal has also missed out on Champions League football for the first time since 1997 and will play in the Europa League next season.

Arsenal manager Arsene Wenger hopes the arrival of Lacazette will help his side to mount a title bid after finishing a disappointing fifth in the Premier League last season.

“We are very happy to have Alexandre join our group,” Wenger said. “He has shown over a number of years that he can score goals and that he is a very efficient finisher. As well, he has very interesting technical qualities and a strong character.”

“He is a guy who is a great addition for us, and someone who will help us challenge at the top level this season.”

Lacazette, who scored a personal best tally of 28 league goals last season, also reached the 100 league goals mark for Lyon and 129 overall since coming through the club’s youth academy and making his debut during the 2009-10 campaign. He is fourth on Lyon’s all-time list of scorers behind Serge Chiesa, Bernard Lacombe and Fleury Di Nallo, and has been capped 11 times by France.

Lacazette was the leader of a golden generation of Lyon players including Barcelona defender Samuel Umtiti and Bayern midfielder Corentin Tolisso who have also left for more prestigious sides. Those three, and Real Madrid’s Karim Benzema, all came through Lyon’s academy, one of the most respected in European football.

Arsenal decision to sign the player raises questions over the futures of Alexis Sanchez and Olivier Giroud. Sanchez has been linked with Manchester City, while Giroud said he wants to stay at Arsenal despite interest from Everton.

At Lyon, Lacazette will be replaced by striker Bertrand Traore of Burkina Faso, who signed a five-year deal from Chelsea, and forward Mariano Diaz, who was brought in from Real Madrid.