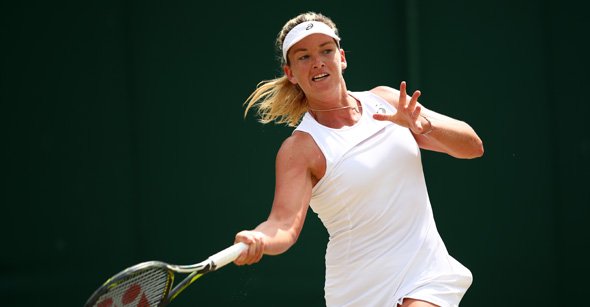 LONDON, Great Britain – No.24 seed CoCo Vandeweghe reaches her second Grand Slam quarterfinal of 2017 with a 7-6(4), 6-4 win over former World No.1 Caroline Wozniacki at Wimbledon.
“Caroline is a tough opponent to play,” Vandeweghe said. “There were some difficult moments, difficult games. I was up a break in the first set, and you think that’s pretty easy going. But she fought back. Anything can really happen in a tiebreaker.
“I think for myself, just sticking to my guns was definitely key.”
Vandeweghe kicked off the season with a revelatory run to the Australian Open semifinals, stunning defending champion Angelique Kerber and French Open winner Garbiñe Muguruza in back-to-back upsets along the way.
Heading to Wimbledon with new coach, 1987 champion Pat Cash, Vandeweghe picked up where she left off in Melbourne at the All England Club, rolling into the second week without dropping a set.
READ ALSO – Garbiñe Muguruza knocks out World No.1 Angelique Kerber 4-6, 6-4, 6-4 to reach Wimbledon Quaterfinal
“I know he was celebrating last night with his team, 30-year anniversary. They all got together. I think this tournament has been very special for him on his own terms.
“He’s kept the same kind of mantra through the start of us working together now. Even more condensed in that way of focusing on first point of every game, you know, just paying attention to myself. That’s been pretty much it.”
Wozniacki has enjoyed a far more consistent season, reaching finals in Doha, Dubai, Miami, and Eastbourne just last week. Making her first French Open quarterfinal since 2010, the former World No.1 was two points from defeat against surging Estonian youngster Anett Kontaveit in her campaign to make the second week.
“I had a game plan going in, and I stuck to it. I want to win on my terms, but at the same time I don’t want to lose because of somebody else dictating me.
“At the same time I’d be more satisfied in knowing that I did everything that I could that day within my control. That’s definitely been focus points for me.”
But the Dane has never made it past the fourth round at the All England Club, and Vandeweghe intended to keep it that way on No.3 Court, edging through a tense opening set tiebreak and earning the only break of the second to clinch the upset in just over 90 minutes.

“I didn’t get many openings on her serve. When I did, she came up with a good serve. That was key today.”
Vandeweghe made her first Wimbledon quarterfinal back in 2015, narrowly losing to Maria Sharapova in three sets, and will have a shot for a second major semifinal of the season should she get past surprise quarterfinalist Magdalena Rybarikova.
Rybarikova caused the biggest upset of the first week when she knocked out pre-tournament favorite and No.3 seed Karolina Pliskova, and survived a resurgent Petra Martic in three sets to start Manic Monday out on No.18 Court.
“There’s still a lot of good players in the draw,” Vandeweghe said. “There’s Grand Slam champions still in the draw. I don’t know if it’s wide open. You still have to win the matches in front of you.
“That’s all I can really think about, is myself really. I can’t really focus on what other people are doing or how they’re feeling.”
Rybarikova thwarted Vandeweghe in their most recent meeting at the French Open, but the American aims to avoid a repeat in Tuesday’s quarterfinal encounter.
“Hopefully I come out with a win. That will be the difference.”