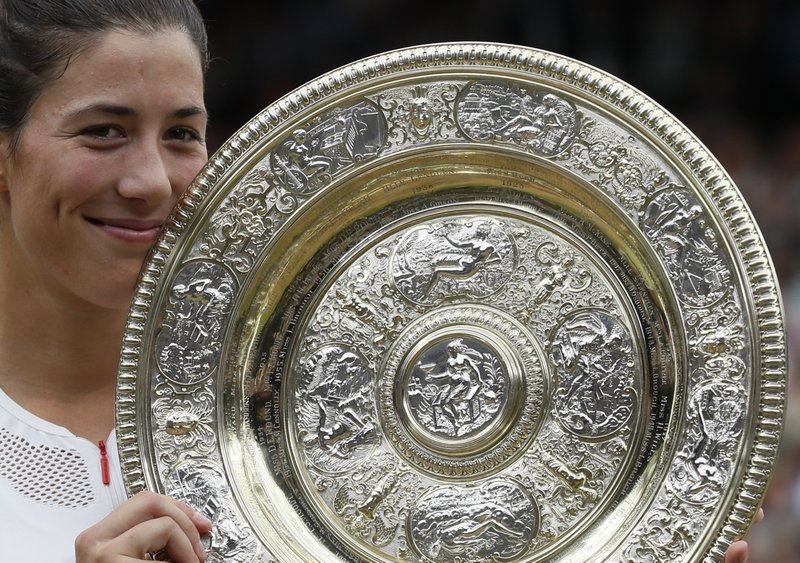 LONDON (AP) — Garbine Muguruza already knew what it’s like to lose to a Williams in the Wimbledon final. Now she knows how it feels to beat one for a championship at the All England Club.

Muguruza powered her way to her first title at Wimbledon and second at a Grand Slam tournament Saturday, beating a fading Venus Williams 7-5, 6-0 by claiming the final’s last nine games.

At 37, Williams was bidding for her sixth championship at the grass-court major, 17 years after her first. And she was so close to gaining the upper hand against Muguruza, holding two set points at 5-4 in the opener. But Muguruza fought those off and did not drop a game the rest of the way.

“She’s such an incredible player,” the 23-year-old Muguruza said about Williams during the trophy ceremony, then drew a laugh from spectators by adding: “I grew up watching her play.”

“She told me one day I was going to maybe win,” Muguruza said. “So two years after, here I am.”

Muguruza defeated Serena in last year’s French Open title match and, by adding this victory over Venus, the Spaniard becomes the first player to win a Grand Slam final against each member of the greatest Sister Act in sports.

With the Centre Court roof closed because of rain earlier in the day, creating echoes with each thwack of racket strings against ball by the two big hitters, Muguruza was too good down the stretch.

Williams began the proceedings with an ace to a corner at 109 mph (176 kph), but Muguruza quickly showed she would neither be overwhelmed by such booming serves nor the occasion. Williams is accustomed to parlaying that stroke into easy points, but Muguruza got back one serve at 113 mph (182 kph) on the match’s second point, and another at 114 mph (184 kph) in the third game — and wound up winning the ensuing exchanges both times.

Still, Williams twice was a point away from winning the opening set, ahead 5-4 while Muguruza served at 15-40. On the first chance, a 20-stroke point ended when Williams blinked first, putting a forehand into the net. On the second set point, Williams sent a return long, and Muguruza pumped her fist.

It was as if getting out of that jam freed up Muguruza — and failing to capitalize on the opportunity deflated Williams. That began the match-closing nine-game run for Muguruza.

Williams began faltering, spraying shots to unintended spots — long, wide, into the net — while the younger, less-experienced Muguruza stayed steady, pounding groundstrokes with all her force. By the latter stages, with the ultimate outcome apparent, the only question was how lopsided the score would be.

Serena Williams is ‘disappointed’ she has had no bizarre pregnancy cravings

Williams finished with 25 unforced errors, 14 more than Muguruza made. It ended when Williams hit a shot that landed long, but was ruled in. Muguruza challenged the call, and after a bit of a delay, the review showed the ball was, indeed, out. Made to wait to celebrate, Muguruza eventually could enjoy the moment, dropping to her knees and covering her face as tears arrived.

Soon enough, Muguruza was being shown her name on the list of champions in the stadium’s lobby — “Finally!” she said — and being greeted by former King Juan Carlos of Spain.

It was an anticlimactic conclusion to the fortnight for Williams, who was the oldest Wimbledon finalist since 1994. She hadn’t made it this far at the All England Club since 2009, hadn’t won the title since a year earlier.

“A lot of beautiful moments in the last couple of weeks,” the American said.

Diagnosed in 2011 with Sjogren’s syndrome, an energy-sapping autoimmune disease, she learned to deal with that condition by turning to a plant-based diet and altering other routines. It took a while for her to get back to her best tennis. Her resurgence began in earnest at Wimbledon a year ago, when she made it to the semifinals.

Then, at the Australian Open in January, Williams reached the final, where she lost to her sister.

Serena is off the tour for the rest of this year because she is pregnant, and Venus spoke about wanting to earn a trophy for the family name.

She came close to achieving that, but Muguruza would not allow it.

Asked if she had a message for Serena, Venus said: “Oh, I miss you. I tried my best to do the same things you do, but I think that there’ll be other opportunities. I do.”

Johnson Olumide - July 2, 2019 0
BBNaija 2019 enter day two today and has the day was closing in, the in housemates experienced first hand what looked like the first Endurance drills of BBnaija. And yes we have a winner for the Night in the one and only Allison Nelson winner of the 2018 Mr Universe Nigeria 2018.

Eddie Andy - April 21, 2018 0
Davido says his upcoming single which will be released on April 30 will be the “biggest song in the country”. He said the song is...

#BBNaija: Prince gifted N10million Naira as a birthday present by his fans (Video)

Adedokun Moses - August 3, 2021 0
It was indeed a memorable 25th birthday for Big Brother Naija star Prince Nelson Enwerem who was blessed with a whopping sum of ten...