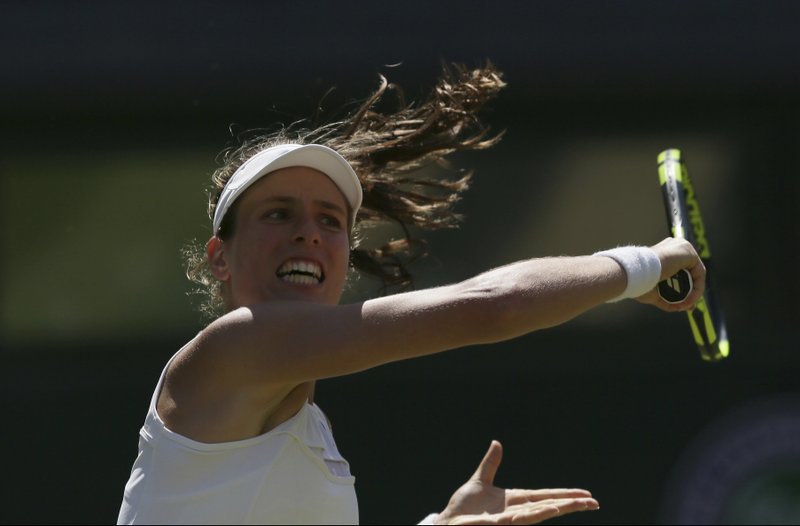 LONDON (AP) — Britain’s biggest hope for a women’s champion at Wimbledon worked her way into the third round on Wednesday.

“It’s a nice feeling not to have to keep going out there,” Konta said. “We were out there a long time and both of us battled incredibly hard.

Konta, seeded sixth, is in the third round at the All England Club for the first time in six appearances. She reached the final at a grass-court warm-up tournament in Birmingham last month, but lost to Vekic.

“I think I overall trusted my game a bit more this time,” said Konta, who is trying to become the first British woman to win the Wimbledon title since Virginia Wade in 1977. “I’m definitely here with the intention of wanting to be a part of the event for the full two weeks.”

Stan Wawrinka, a three-time Grand Slam champion who lost in the first round at Wimbledon, is dating Vekic and was at Centre Court watching the match.

On Court 16, Daniil Medvedev expressed his anger after losing his match by throwing some coins at the foot of the chair umpire’s chair.

After the match ended, both players shook hands with chair umpire Mariana Alves. Medvedev then grabbed his wallet and pulled out some coins and tossed them toward the chair.

“In the heat of the moment I did a bad thing and I apologize for this,” said Medvedev, who denied he was implying the chair umpire was paid off. “I was just frustrated. It had no meaning.”

When the Wimbledon gates opened Wednesday morning, the race was on to get the best spot on Mount Murray.

The hill next to No. 1 Court at Wimbledon, formerly known as Henman Hill and also referred to as Murray Mound, was a coveted spot for Day 3 at the All England Club because Konta and Andy Murray were scheduled to play their second-round matches on Centre Court.

Thousands of fans on the grounds and without tickets to the main stadium often gather on the hill to watch the action on a giant TV screen.

The area was named Henman Hill in honor of Tim Henman, another British player but one who never was able to win the title. The nickname shifted to Murray when he came on the scene and eventually ended the country’s 77-year wait for a homegrown men’s winner when he won the title in 2013.

Rafael Nadal, a two-time Wimbledon champion, will be on Centre Court after Murray against Donald Young, while five-time champion Venus Williams was facing Wang Qiang on No. 1 Court.