Home News Karolina Pliskova will rise to No. 1 in the WTA rankings Next... 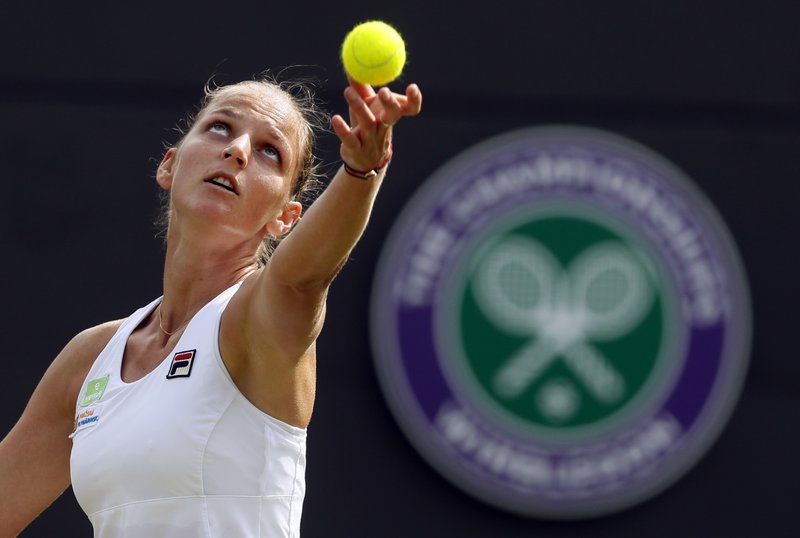 LONDON (AP) — Karolina Pliskova will rise to No. 1 in the WTA rankings for the first time next week despite a second-round loss at Wimbledon — and no Grand Slam titles.

Pliskova, a 25-year-old from the Czech Republic, was assured of moving up two places from No. 3 when the woman who currently is No. 2, Simona Halep, was beaten in the Wimbledon quarterfinals on Tuesday.

Pliskova will become the 23rd woman to spend time at No. 1.

Angelique Kerber will relinquish the top spot after exiting in the fourth round at the All England Club a year after making it to the final. Kerber first got to No. 1, overtaking Serena Williams, by winning the U.S. Open last September, beating Pliskova in the final.

Pliskova reached her second major semifinal at the French Open last month, losing to Halep there.

After losing to 87th-ranked Magdalena Rybarikova 3-6, 7-5, 6-2 at the All England Club last week, Pliskova was asked about the possibility of still being able to go to No. 1. Rybarikova advanced to the semifinals Tuesday.

“Well, for me, the tournament is over. So whatever happens, happens,” Pliskova said. “I’m not going to pray for somebody’s losing or winning.”

The rankings count points from the preceding 52 weeks, and in that time, Pliskova won four WTA titles and has nine victories over top-10 opponents. She also leads the tour in aces since 2015.

“I feel she deserves to be there. She has the best serve, I think, after Serena,” Halep said. “So, ‘well done’ to her. She played really well this year.”

It was the second Grand Slam tournament in a row that Halep fell one match win short of making her debut at No. 1.

A victory in the French Open final would have allowed the Romanian to get there, but she couldn’t get past Jelena Ostapenko that time.

“Of course, one of my goals is to get to No. 1. But I had another chance here. I was close, I could say,” Halep said Tuesday. “But doesn’t affect me that much, because I think I have many years ahead. So maybe I will have more chances. I’m close, so I have just to keep working.”