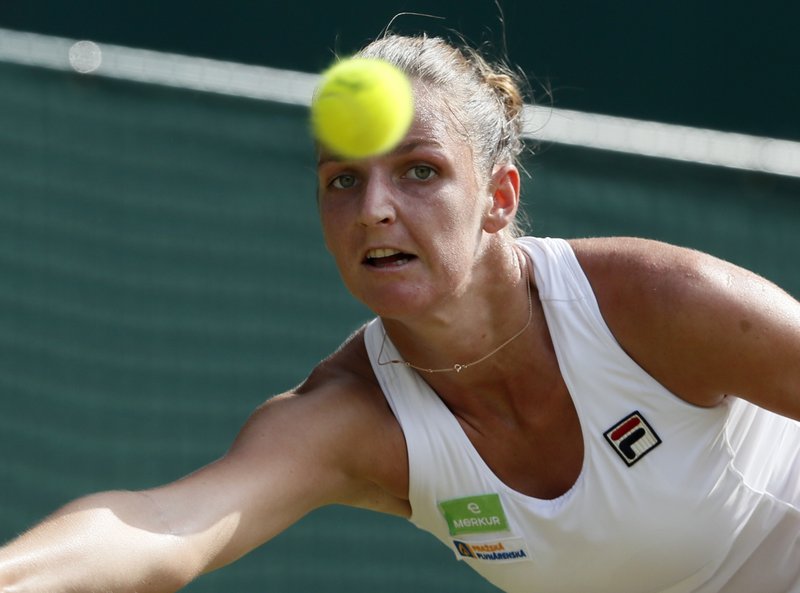 LONDON, Great Britain – Magdalena Rybarikova brought her stellar grass court form to the All England Club and showed the world some of her best tennis to dispatch No.3 seed Karolina Pliskova, 3-6, 7-5, 6-2 to reach the third round of Wimbledon.
Karolina Pliskova has become the highest-seeded player to fall at Wimbledon, losing to Magdalena Rybarikova in the second round.

Pliskova, the No. 3-seeded player, was the runner-up at the U.S. Open last year and had reached at least the quarterfinals of her last three Grand Slam events.

Despite the 3-6, 7-5, 6-2 loss, Pliskova still has a chance to move up to No. 1 in the rankings after Wimbledon depending on how Angelique Kerber and Simona Halep fare the rest of the tournament.

Rybarikova, making her 10th appearance at the All England Club, has never been past the third round in any of her 35 previous Grand Slams. Ranked No. 87, she reached the third round at Wimbledon once, in 2015, and the third round of the U.S. Open twice, in 2008 and 2009.

She lost in the first round at Wimbledon last year and underwent wrist and knee surgeries that prevented her from playing again until February, when she played in an ITF event in Germany.
READ ALSO
Bobrisky slays in chest baring photos (MUST SEE)

Johnson Olumide - December 11, 2016 0
Today we know her has the richest Female blogger in Africa and not for her failed modelling Career and for that we celebrate her. for...

Johnson Olumide - May 1, 2019 0
Nigeria's topmost Vblogger Toke Makinwa spills some tea via her social media page earlier today as she reveals why she attends lot of social...

#BBNaija: Erica and Kiddwaya Relationship is like the Titanic Movie – OAP Dotun

Johnson Olumide - August 30, 2020 0
The Ship between Billionaire Son Kiddwaya and Nollywood fast upcoming actress Erica is likely sinking just like the Titanic movie and no one can...

Tiwa Savage gets Raunchy as she flaunts boobs in New Photos

Johnson Olumide - January 12, 2017 0
The 'Bad' than you singer come into the Music Industry over 5 years ago and as been able to establish herself as one of...

Huawei Devices Will No Longer Use SD Card Slots As U.S. Sanction Continues

Violette - May 28, 2019 0
Huawei has been hit with a lot of blows that don't take a gander by any means, One Of the Blow incorporate the loss...