Home News Marin Cilic in pain and tears never really had a chance... 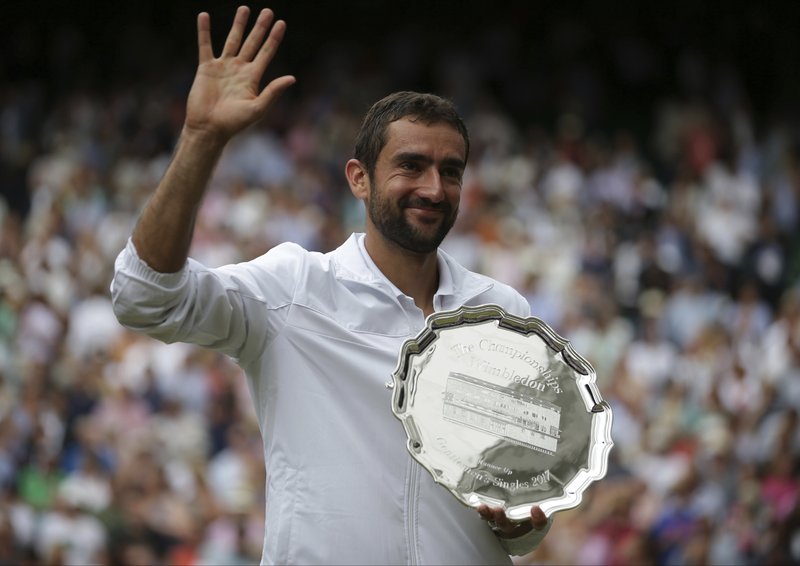 LONDON (AP) — In pain and in tears, Marin Cilic never really had a chance.

The big-serving Croat played with a blister on his left foot in Sunday’s Wimbledon final against Roger Federer. Cilic looked good for a while, but the injury quickly got worse as Federer quickly got better and won 6-3, 6-1, 6-4.

“It was definitely one of the unfortunate days for me,” Cilic said after losing on Centre Court. “Fluid just came down under my callous in the foot. … Every time I had to do a reaction fast — fast change of movement — I was unable to do that.”

Cilic said he first felt the blister during his four-set victory over Sam Querrey in the semifinals. The 2014 U.S. Open champion said it wasn’t that bad on Friday, but it got more serious that night.

“I felt that the foot wasn’t so good. It wasn’t so bad after the match,” Cilic said. “We tried to take some fluid out overnight, and yesterday in the morning it was worse. The doctors and physios were trying to help as much as they could. They really did the best they could, really helped a lot.”

Cilic served to open the match against Federer and both held to 2-2. Federer then broke twice to take the first set, and then broke again early in the second to take a 3-0 lead.

After that game, Cilic walked back to his changeover chair and broke down, tearing up as he covered his head with his white towel.

“It was a mix of emotions. Obviously a little bit of a frustration that I had that, and also trying to focus on the other side,” Cilic said. “It’s a tough part when you’re in that kind of situation. You know there is not much possibility that you’re going to win. It’s just actually fighting it through.”

After the second set, Cilic called for a trainer and had his left foot re-taped.

Federer knew something was going on with Cilic, but he wasn’t exactly sure what.

“Because I didn’t know and I couldn’t tell, I just said; ‘Focus on your game. Focus on your match. Keep playing,’” said Federer, who won his eighth Wimbledon title and 19th major overall. “The good thing is I was already in the lead.”

Cilic came into the match one victory from his second major championship. Despite a 1-6 record in their previous seven matches, Cilic beat Federer in straight sets in the U.S. Open semifinals three years ago on his way to the title. Federer followed that up by defeating Cilic last year in the Wimbledon quarterfinals, but Federer is 35 and Cilic, at 28, is one of the biggest hitters in the game.

The injury, though, made Sunday’s match a veritable walkover.

“The first five, six games was really good tennis, exactly the way we were hoping, crowd was hoping, that it was going to be this great battle,” said Jonas Bjorkman, Cilic’s coach. “But unfortunately it was not meant to be. You could see he started not being able to push off as good and then he started giving us a little bit of a signal that it was not correct 100 percent again, so then obviously we knew that it was a problem.”

That problem never went away, but Cilic stayed in the match, trying to hold serve and struggling to even win one point when the ball was in Federer’s hand.

“I really wanted to give my best,” Cilic said, “to try as much as I could.”