Home News No.6 seed Johanna Konta Battle Past No.21 seed Caroline Garcia, with... 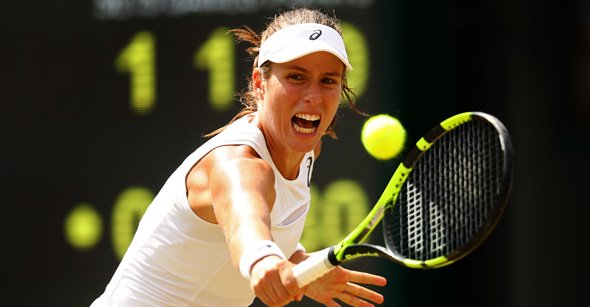 LONDON, Great Britain – It’s been 33 years since Wimbledon had home representation in the last eight of the women’s singles – but No.6 seed Johanna Konta ended the drought in calm, collected fashion with a 7-6(3), 4-6, 6-4 win over No.21 seed Caroline Garcia in two hours and 11 minutes.

Back in 1984, No.10 seed Jo Durie made her fourth and final Slam quarterfinal with a 3-6, 6-3, 9-7 fourth-round victory over none other than a 15-year-old Steffi Graf, who was making her Wimbledon debut. Over three decades later, her near-namesake Konta showed equivalent composure to come through a tight three-setter that was decided by just a handful of crucial points.

“It’s very exciting,” Konta said in her post-match press conference. “It’s another step forward to being involved in the event for the full two weeks.

“Of course, I’ve dreamed of it ever since I was a little girl, to be a Grand Slam champion. But right now I’m in the quarterfinal stage. I’m playing against an incredibly tough opponent next.

The Brit got off to the brighter start, showing her aggressive intent by coming to the net on the Garcia service before the 23-year-old ballooned a forehand long to cede an immediate break. The Frenchwoman would go on to live and die by this shot: it would be responsible for 18 of her 24 rally winners, but also 13 of her 19 unforced errors. It would power her back into the first set when, as Konta served for it, Garcia landed her high-risk returns to break back and ultimately take the set into a tiebreak – where it would let her down again when a forehand shank handed the No.6 seed a second set point, which she duly took with her second ace.

But it was Konta’s forehand that proved the weakest link in the second set as it leaked six of her seven unforced errors to quickly fall behind 1-5. However, the 26-year-old has gained a reputation for mental fortitude by focusing only on what she can control on the court: overall, it proved useful for weathering the first-strike storm of her opponent’s hyper-aggressive strategy, and in this set, tightening up her groundstrokes enabled her to gradually reduce the deficit to 4-5. Garcia, who fired 12 aces overall, was able to hold on to take the set anyway – but Konta had found her range again, and there was no danger of a similar lapse in concentration as the match went into a decider.

The third set proved reminiscent of Konta’s epic 7-6(4), 4-6, 10-8 second-round victory over Donna Vekic: a clinical exhibition of big serving and efficiently backing up those deliveries. For nine games, neither player faced break point – or, for that matter, was even taken to deuce. Konta landed 76% of her first serves, Garcia 79%: there was nothing between them.

Until the final game, when the aforementioned handful of points came into play. A brilliant lunging Konta backhand pass gave her a half-chance at 30-30; a netted Garcia backhand gave her match point to make history for her country. And it transpired that the Frenchwoman, who had teetered all afternoon between scorching winners and wild misses, would ultimately die by that forehand. A big serve gave her a high return to smash away – and she sent the ball into the middle of the net, and Konta into a first Wimbledon quarterfinal and a date with Simona Halep tomorrow.

“We’ve played twice already this year, obviously in Miami and then again during Fed Cup,” Konta said. “I think that is already some knowledge on each other.

Toke Makinwa lash out at Nigeria religious leaders, claim they are hypocrite (Video)

Adedokun Moses - November 19, 2020 0
Popular media personality, Toke Makinwa have lashed out at religious leaders in the country as she labelled them a hypocrite who are used to...

You don hear the mata or you no get data? Zlatan Ibile set to...

Joel Adesina - July 1, 2020 0
You don hear the mata or you no get data? Zlatan Ibile set to do data giveaway says in a new video. The Zanku dancer...

Violette - June 10, 2019 0
Nigerian singer, Peruzzi after being widely criticised for slapping a popular social media influencer, Pamilerin, over a tweet he shared on Twitter, in January,...

Violette - May 12, 2020 0
Nigerian artiste, Adekunle Gold, has confirmed that he’ll be gracing the music industry with a new banger in a few days. The song which he...