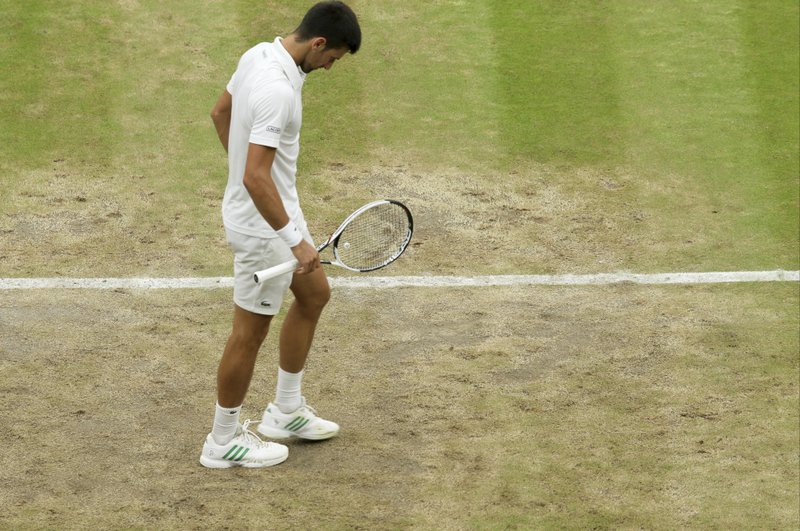 LONDON (AP) — Bothered by what he called a “hole” at Centre Court, Novak Djokovic complained about the condition of the grass at Wimbledon on Tuesday.

Djokovic, who defeated Adrian Mannarino in the fourth round, said the courts are among the worst he’s played on in his 13 years at the All England Club.

“(The) courts, honestly, are not that great this year and many players feel the same, but it is what it is,” Djokovic said in a television interview after his match ended. “I’m sure they’re trying their best, but I’ve played on better courts.”

On Tuesday, playing with the roof closed, Djokovic could be seen after points picking up or kicking away small portions of grass that had loosened up on the baseline.

The second-seeded Serb lodged his disappointment with chair umpire Carlos Bernardes during the match and pointed out the issue afterward.


“He wanted me to show him, so I showed him,” Djokovic said at a news conference. “His reaction wasn’t that great.”

Mannarino, who had not played on Centre Court until he faced Djokovic, said his only concern about the surface was that he had to make sure he didn’t slip during the match.

“To me, the Centre Court (was) really good, actually,” Mannarino said. “Maybe he was complaining a little bit, but compared to the other courts I’ve been playing on before, it was good.”

Tuesday was the first day persistent rain moved over southwest London since Wimbledon started. Because of the dry conditions, the 18 courts saw nearly uninterrupted play over the first seven days of the tournament, which led to consistent wear.

Neil Stubley, the club’s head of courts and horticulture, said on Saturday that the measurements his staff had taken over the first week of play showed that the grass was considered to be healthy and within the acceptable standards of use.

He also expressed confidence that the surface at Centre Court would be able to hold up over the second week.

Simona Halep, whose quarterfinal loss to Johanna Konta was the third match on Centre Court on Tuesday, said she didn’t notice the hole Djokovic had mentioned.

And Djokovic said the issue wasn’t one of safety as much as it was about fair play.

“Grass is probably the most demanding and complex surface for maintenance,” he said. “The more you play on it, the worse it actually gets, unfortunately.”