Home News Novak Djokovic considering a break from tennis, with surgery on his... 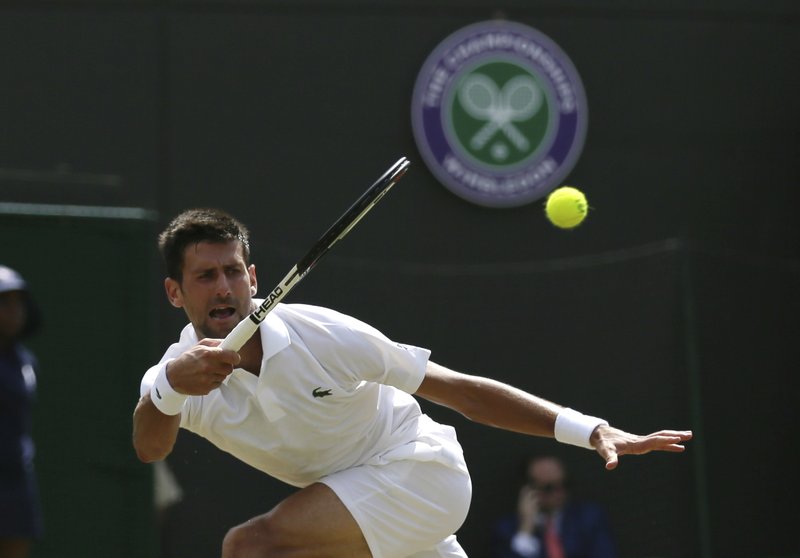 LONDON (AP) — Novak Djokovic is considering a break from tennis, with surgery on his injured right elbow now a possibility.

The 12-time Grand Slam champion, who has won three Wimbledon titles, retired from his quarterfinal match against Tomas Berdych at the All England Club on Wednesday. He said his elbow has been giving him problems for a year and a half.

“It’s not a time and place for me to talk about the details,” Djokovic said after pulling out while trailing 7-6 (2), 2-0. “I’m just going to talk with specialists, as I have done in the last year or so, try to figure out what’s the best way to treat it and to solve it, to find a long-term solution.”

At the end of his news conference, speaking in Serbian and translated through an interpreter, Djokovic alluded to the fact he could end up taking a long break.

That would be a first for Djokovic, who has been one of the best players on tour for about a decade. He won the first of his six Australian Open titles in 2008, and won four straight majors from the 2015 Wimbledon tournament through last year’s French Open.

He hasn’t won one since.

“The specialists that I’ve talked with, they haven’t been really too clear, mentioning also surgery, mentioning different options. Nobody was very clear in what needs to be done,” Djokovic said. “Yeah, I guess the break is something that I will have to consider right now.”

Djokovic had a relatively easy run to the quarterfinals at Wimbledon this year. His opening match ended early when his opponent, Martin Klizan, retired with an injury. He then won his next three matches in straight sets. But in the fourth-round win over Adrian Mannarino, Djokovic called for a trainer during the final set.

And after the first set against Berdych, he again called for a trainer to check his right arm.

“I was able to perform up to this stage. But as I’ve said, it was only getting worse,” Djokovic said. “Unfortunately today was the worst day. Probably the fact that I played yesterday, kind of days adding up, as I’ve said before, it wasn’t helping at all.”

Djokovic complained about the schedule on Tuesday after playing his match against Mannarino a day after it was originally scheduled. Playing two days in a row certainly didn’t help, but Djokovic said he did everything he could to get ready for Wednesday’s match.

“I spend probably about two hours, 2½ hours today, on the table in between the warmup and match, trying to do everything I possibly could to make me fit,” Djokovic said. “But it wasn’t to be.”