Home News Roger Federer has learned not to take anything for granted, says “I... 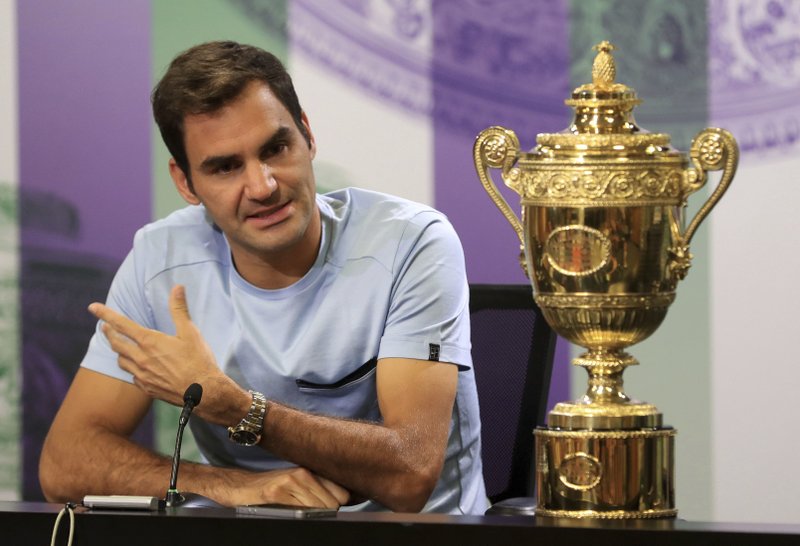 LONDON (AP) — Roger Federer has learned not to take anything for granted.

That’s why he said what he did during the trophy presentation after his record-breaking eighth Wimbledon championship: “I hope this wasn’t my last match. And I hope I can come back next year and try to defend the title.”

Some wondered whether that meant Federer was considering retirement.

Hardly. What he meant, Federer explained Monday, was simply: “I can’t think too far ahead.”

“I didn’t think about what I was going to say. It just came out that way, to show the people that, yes, of course I hope to defend my title and, of course, I wish to be back here next year. But we just don’t know if it’s really going to actually happen,” he said in an interview with The Associated Press at the All England Club the morning after beating Marin Cilic 6-3, 6-1, 6-4 in the final. “We have to wait and see.”

He didn’t always take that approach, back when he was in his 20s and reached a record 10 Grand Slam finals in a row.

Things are different these days.


“At 25, when you win, you’re like, ‘All right, I’ll see you next year!’ because it’s normal. You’re going to be playing, for sure. The body’s going to be fine, most likely. And if not next year, well, then the year after that, you know?” Federer said as he walked through the hallways of Centre Court in gray pants and a white zippered warmup jacket. “But I can’t really think two years ahead now. Let’s be honest.”

First of all, there’s the no-way-around-it matter of his age: Federer turns 36 on Aug. 8; he is the oldest man to win Wimbledon in the Open era, which began in 1968.

And then there’s what happened about 18 months ago: A father of four, he was preparing a bath for his twin daughters when he turned and felt a “click” in his left knee. In February 2016, he had the first operation of his career, arthroscopic surgery to repair torn cartilage.

Federer returned to the tour that March, then missed the French Open because of lingering back problems, ending his record streak of 65 consecutive Grand Slam tournament appearances. After a semifinal loss at Wimbledon a year ago, he took the rest of the season off to let his body heal, missing the U.S. Open, Rio Olympics and every other event.

“I’ve seen how quickly things can change,” Federer said. “Filling a bathtub for my girls changed the whole next 1½ years of my tennis life, really.”

These past six months turned out OK, though.

Federer is 31-2 with a tour-leading five titles in 2017. That includes his 18th Grand Slam trophy at the Australian Open — ending a 4½-year drought without a major title — followed by his 19th at Wimbledon, where he became the first man since Bjorn Borg in 1976 to win the tournament without dropping a set.

“Everything he does is exceptional,” said Jonas Bjorkman, Cilic’s coach. “Obviously, he’s unique in many ways.”

Federer himself is surprised at how well this year has gone so far.

He says he certainly didn’t expect to win both majors he’s entered (he sat out the French Open again, using another break during the clay-court circuit to recharge before the brief grass portion of the season).

Now he moves on to the hard courts, including the U.S. Open, which starts Aug. 28.


“I have a hard time thinking I could win three Slams in one year. It just sounds totally surreal to me,” said Federer, who did collect trios of major titles in 2004, 2006 and 2007. “But I’ll prepare myself the best way possible, so that I will have the best chance to really excel there in New York.”

His voice sounded deeper than usual, a bit of after-effect from celebrations into the wee hours that included the Wimbledon champions’ dinner and drinks with a group of more than 30 friends at a bar. Federer said he didn’t get to sleep until 5 a.m.

Here he was, about 6½ hours later, returning to the arena to pose for group photos with 200 members of the tournament’s staff — groundskeepers and others who sat in a corner of the stands while he took a spot on a courtside ledge, Wimbledon’s gold trophy beside him.

Then he posed on the court for a few last pictures, steps from a small green sign with white letters instructing, “Keep off the grass.”

So, yes, expect him back on that turf in 2018. Just remember not to take his excellence for granted. He won’t.

Johnson Olumide - November 1, 2018 0
Argentine and Barcelona striker, Lionel Messi is back to full training after he was in bad shape for three weeks due to an injury. He had fractured...

“User and a clout chaser” – James Brown reacts to Bobrisky’s rift with his...

Adedokun Moses - May 8, 2021 0
Nigerian cross-dresser, James Brown has finally reacted to the ongoing drama involving his rival, Bobrisky and her Ivorian fans, Oye Kyme. It would be recalled...

Adedokun Moses - September 19, 2020 0
Popular Nollywood actress, Lizzy Anjorin have taken over the role of a counselor as she advise fans on the type of people they  should...