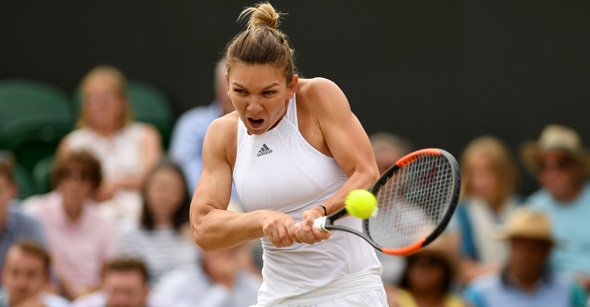 LONDON, Great Britain – Simona Halep charged into the Wimbledon quarterfinals in commanding style, taking down former World No.1 Victoria Azarenka in straight sets to strengthen her own bid for the WTA’s top ranking.

After needing a tiebreak to decide a tight opening set, Halep accelerated ahead to defeat Azarenka 7-6(3), 6-2 in one of the most anticipated matchups on Manic Monday.


“I knew that is going to be a tough one,” Halep said in her post-match press conference. “She’s back and she’s playing great. I think was a pretty good tennis out there.

“I’m really pleased with the way I finished the first set. It was very close. I can say that I felt more relaxed, and I just stepped in and I hit stronger.”

With current World No.1 Angelique Kerber crashing out to Garbiñe Muguruza earlier in the day and Karolina Pliskova going out earlier in the tournament, Halep just needs to reach the Wimbledon semifinals to secure the No.1 ranking.

Should she fall in the quarterfinals, Pliskova will end the fortnight as the new No.1.

“I’m not thinking about that because I was in that situation one more time,” she said. Halep was two matches from the No.1 ranking two weeks ago in Eastbourne, but failed to clinch it.


“So I feel that I have more experience and I hope I will not think that much during the match. I just want to go there and to win it.”

Halep was taken to task by the two-time Grand Slam champion in their round of 16 clash – especially in the opening set, where the Romanian found herself trailing down a break twice and twice breaking straight back.

After staying toe-to-toe for most of the opening set, Halep finally pulled away in the tiebreak as Azarenka seemed to lose her pace and the unforced errors started creeping into her game.

Halep carried her momentum into the second set, racing ahead to a daunting 4-0 lead over an increasingly frustrated Azarenka. The Belarusian saved three match points – grabbing one of the breaks back along the way – but Halep finally closed out the match on the fourth time of asking, sealing the final quarterfinal spot after an hour and thirty minutes.

It won’t get any easier for the Romanian in the next round, though, as she’ll take on Britain’s Johanna Konta – along with the All England Club’s hopes for a local champion – in the quarterfinals. Halep trails Konta 0-2 in their head-to-head record.