Through it all, through the difficult days of adjusting to life with an energy-sapping autoimmune disease, through the disappointing days of first-round losses that led to questions about retirement, through all of the accumulating years, she pressed on. And on Saturday, facing Garbine Muguruza in the final, Williams had a shot at her sixth title at the All England Club — nine years after her last one and, remarkably, 17 years after her first.

Williams twice was a point from taking the opening set before unraveling completely, dropping the last nine games and losing 7-5, 6-0 to Muguruza, who earned her first Wimbledon championship.

“This is where you want to be. I like to win. I don’t want to just get to a final,” said Williams, at 37 the oldest woman to play in a title match at the grass-court major since 1994. “It’s just about playing a little better.”

She appeared ready to take control Saturday, ahead 5-4 in the first set and with Muguruza serving at 15-40. But Williams netted a forehand to close a 20-stroke exchange on the first set point. And on the second, she sent a return long. Muguruza would go on to win that game — and the next eight, too, to earn her third Grand Slam trophy. 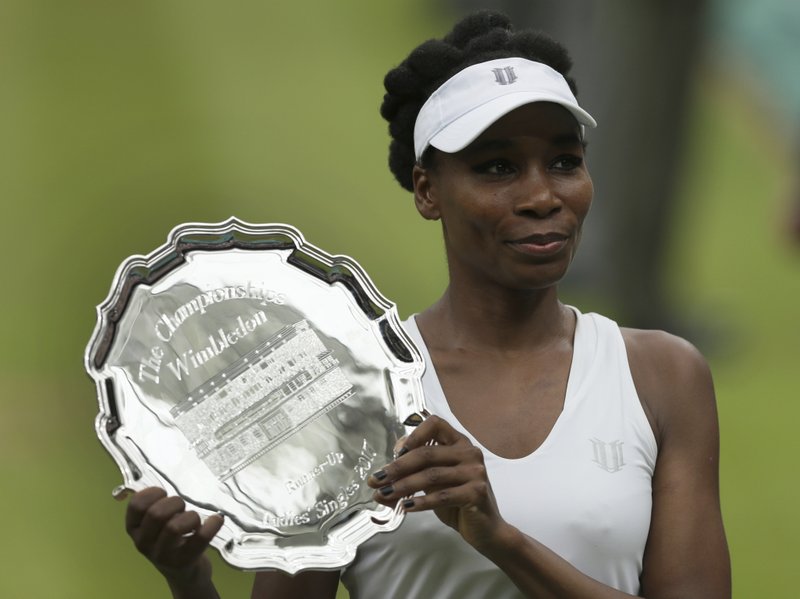 But her coach, David Witt, offered one explanation for the way everything came undone for Williams against Muguruza.


“It was just nerves,” Witt said.
“She never, I thought, looked like she was relaxed out there,” he added.

Williams arrived in England a few weeks after being involved in a two-car accident in Florida. Two weeks after the crash, a 78-year-old passenger in the other vehicle died. At a news conference following her first-round victory at Wimbledon, Williams was asked about the episode, and she tried to respond, before wiping away tears and briefly leaving the room to compose herself.

Witt said they hadn’t discussed what happened with each other once the tournament began, hoping Williams could “just focus on the tennis.”

Up until late in the first set Saturday, Williams did play quite well.

In 2011, she revealed she had been diagnosed with Sjogren’s syndrome, a condition that can cause exhaustion and joint pain. Williams has since spoken about how she turned to a plant-based diet and learned other ways to get by. A half-dozen exits from majors after her opening match made some think Williams might stop playing tennis, let alone return to its biggest stages.

“There were definitely,” Williams said this week, “some issues.”

But she never lost her love for the sport or a desire to get her game back in order.

“I’m just very surprised that she’s hungry to keep winning. She has won almost everything. She’s not (still) young, to be looking forward to all these matches. She just shows this toughness,” Muguruza said. “I don’t know if I will be like this @ her age.”

The strongest initial sign of a renaissance for Williams came during a run to the Wimbledon semifinals a year ago. Then, this January, she got to the Australian Open final for the first time since 2003, losing to her sister, Serena. And then came these past two weeks and her first appearance in the Wimbledon final since a loss to Serena in 2009.


“I’ve been in a position a lot of times this year to contend for big titles. That’s the kind of position I want to keep putting myself in,” Williams said. “It’s just about getting over the line. I believe I can do that.”

She was asked more than once by reporters Saturday whether the Sjogren’s or the accumulated fatigue or her age played a role in the way the match unfolded. But Williams deflected those questions, instead offering praise of Muguruza, whose power and precision gave the American problems.

“Credit to her,” Williams said. “She just dug in there.”

Williams hit five double-faults, three in one game and once to get broken to begin the second set. She finished with 25 unforced errors, more than twice as many as Muguruza.

“She started pressing in the second,” Witt observed, “and balls were flying out like you don’t see.”

She sounded certain that it won’t be the last.

Asked during the on-court trophy presentation if she had a message for Serena, who is off the tour while expecting a baby, Venus said: “Oh, I miss you. I tried my best to do the same things you do, but I think that there’ll be other opportunities. I do.”

After all that’s gone on, why doubt her now?

Johnson Olumide - July 8, 2019 0
This Photos had been Trending all day on the internet and after taking a look at the Photos, had to saw they were splendid,...

Johnson Olumide - February 17, 2020 0
I have ever had love for this great country called canada, its mass land area, wealth and peace surrounding the Country has a whole...

Johnson Olumide - July 15, 2019 0
The GCFRN of the Armed Forces of Nigeria and President f the Republic of Nigeria wishes Nigerians a Happy New Year and here are...