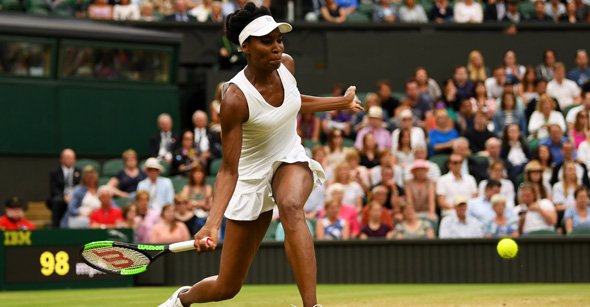 LONDON (AP) — Playing at Wimbledon for the 20th time, Venus Williams is in the semifinals for the 10th time.

The five-time champion at the All England Club advanced to the last four for the second year in a row by beating Jelena Ostapenko 6-3, 7-5 Tuesday under a closed roof on Centre Court.

Williams, who is 37 years old, made her Wimbledon debut a few months before Ostapenko was born. She last won the title in 2008, but reached the semifinals last year and the Australian Open final this year.

Williams will next face either second-seeded Simona Halep or Johanna Konta on Thursday. In the other women’s semifinal match, Garbine Muguruza will play either CoCo Vandeweghe or Magdalena Rybarikova. Muguruza beat Svetlana Kuznetsova 6-3, 6-4 on No. 1 Court.

Konta was next to play on Centre Court against Halep. On Court No. 1, Rybarikova was playing Vandeweghe.

On the men’s side, Novak Djokovic advanced to the quarterfinals by beating Adrian Mannarino 6-2, 7-6 (5), 6-4. That match, the first to be played under the roof on Centre Court at this year’s tournament, was postponed from Monday.

Williams went up a break early in both sets against Ostapenko, the French Open champion. But the 20-year-old Latvian broke back in the second set and pushed the score to 5-5. A few unforced errors later, though, and Williams broke again for a 6-5 lead before serving out the match.

Williams ended up with eight aces and only 13 winners. Ostapenko had one ace and 20 winners.

In the first match, Djokovic was up a break in the third set when he asked for a medical timeout and a trainer examined and stretched his right shoulder. The second-seeded Serb appeared to grimace in pain a couple of times as his shoulder was being checked.

“It’s been something that I’ve been dragging back and forth for a while now,” Djokovic said. “But I’m still managing to play, which is the most important thing.”
Djokovic was broken only once, in the second set. But the 12-time major champion, who won the Wimbledon title in 2011, ’14 and ’15, broke Mannarino early in the third and advanced to the quarterfinals at the All England Club for the ninth time.

The men traditionally have Tuesday off at Wimbledon, but Rafael Nadal’s five-set loss to Gilles Muller on Monday forced Djokovic’s match to be pushed back a day.
The rain then started at about 11:30 a.m. on Tuesday. The opening match on Centre Court was due to start at noon, so the roof was closed for the first time this year. The rain came and went into the afternoon, forcing the delay of the first women’s quarterfinal match on No. 1 Court.

There was a brief rain delay on the opening day of the tournament, but the roof stayed open and the rain went away.
___
More AP tennis coverage: https://apnews.com/tag/apf-Tennis
READ ALSO
Jeff Bezos does not pay tithe-Daddy Freeze

Adedokun Moses - December 21, 2020 0
Controversial Nigerian journalist Kemi Olunloyo has dished out a piece of advice to women in the country as she urged them not to marry...

Kate Upton Sassy and Classy as she attends the US Open 2016 Semifinal...

Johnson Olumide - July 11, 2019 0
The Sexy and Busty Supermodel and Swimsuit Model was in attendance at the US Open Semifinal Match Between Novak Djokovic and Gael Monfils at USTA Asur Stadium...

Billionaire Son, Kiddwaya subtly replies his Ex Erica after she downgraded his Write-Up

Johnson Olumide - April 15, 2021 0
Reality Star and Billionaire Son, KiddWaya in his response to his Ex-Girlfriend Erica, subtly shaded her after she had earlier reacted to Kidd's long...

Violette - July 13, 2020 0
Layal Jade Tinubu a Nigerian entrepreneur and the wife to the popular Nigerian Media Practitioner. The Founder of Noella Foundation, Seyi Tinubu carpets and...

Adedokun Moses - November 30, 2019 0
Singer and songwriter, Mr Eazi has taken the role of a counselor as he advise his fans on the need to stay focus. Mr Eazi...