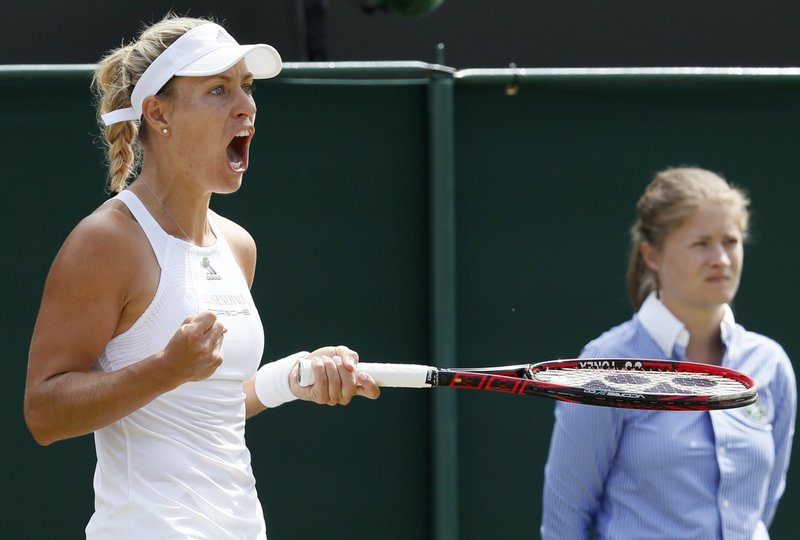 LONDON (AP) — Four of the remaining 16 women at Wimbledon have played in a final at the All England Club. One of them is certain to be eliminated in the fourth round.

Angelique Kerber and Garbine Muguzura, who have won titles at other Grand Slam tournaments, each lost to Serena Williams in the Wimbledon final the last two years — Kerber in 2016, Muguruza in 2015. They meet Monday for a spot in the quarterfinals.

The top-ranked Kerber has lost her past four matches against Muguruza.

“I think I have to play from the first point good tennis against her,” Kerber said Saturday. “I have to be aggressive, as well, and trying to (play) my game from the first ball that we hit.”

The other players with experience in the final at the grass-court major tournament are Williams’ older sister, Venus, and Agnieszka Radwanska.

Venus Williams has five Wimbledon titles and lost in another three finals — each time to Serena. Radwanska was the runner-up at the All England Club in 2012 to — yes, that’s right — Serena Williams.

Venus Williams lost in the semifinals last year and is playing at the tournament for the 20th time.

At 37, she is the oldest player left in the women’s draw. On Monday, she will play the youngest woman left, 19-year-old Ana Konjuh of Croatia.

“Yeah, it’s interesting, for sure,” Williams said. “But I guess when you walk on the court, I don’t think either of us is thinking about the age. You’re thinking about, ‘How do I win?’”

Konta has become the latest local hope at the All England Club. The last British woman to win Wimbledon was Virginia Wade in 1977.

Kerber and Muguruza had their chances to win the last two years, but they ran into Serena Williams. That can’t happen this year — the defending champion is pregnant and taking the rest of the season off.

“I have toughest rounds to come. I’m just looking forward for it,” said Muguruza, who won the French Open last year. “I’m not thinking that far, like most people do.

“For me, it’s just more simple than that. I’m just going to take care of my next match and we see from there. It’s just like that.”

That next opponent is the No. 1 player in the world — even if Kerber has been struggling at the major tournaments this season after winning the Australian Open and U.S. Open last year.

“It was for sure a really important win for me today, especially because it was a really up-and-down match, and I was down at least 2-4 in the second set,” Kerber said. “Maybe it is a turnaround. We will see.”