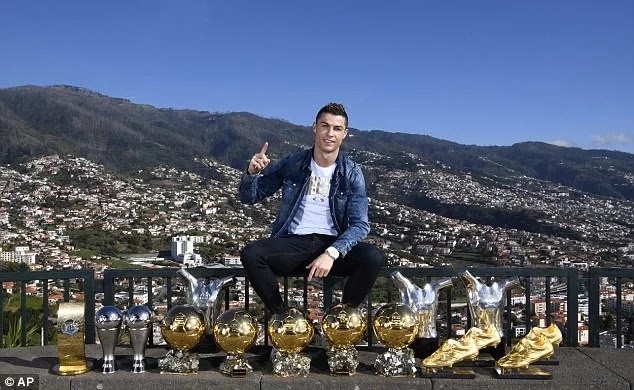 The Portugese captain who equaled Lionel Messi’s tally of five Ballon d’Ors, posed in his Madeira homeland with the 15 individual trophies he has won throughout his successful career.

Cristiano Ronaldo has played for Manchester United, Real Madrid, and has also won three champions league cup with the clubs.

The four-time Ballon d’Or winner is worth an estimated $400 million, with most of money coming from his soccer salary.

Violette - July 25, 2019 0
One of Ghana’s most respected Ex Goalkeepers for the Ghana National Team (Blackstars ) Richard Kingson, has been arrested for defying motor traffic regulations. ‘Olele’...

Johnson Olumide - November 22, 2017 0
The singer who earlier in the week had to stop her performance to scold a fan who threw money at her, showed off her...

Johnson Olumide - January 16, 2018 0
The 49th annual Image Awards ceremony, which honors people of color in entertainment and literature as well as people who promote social justice through...

Violette - March 28, 2018 0
Manchester City are to open talks with Raheem Sterling regarding a new contract before the end of the season, sources are reporting.  A new contract...

Adedokun Moses - January 25, 2020 0
Chioma Rowland, the engaged girlfriend of singer and songwriter, Davido has arrived in Nigeria for the first time since her son Ifeanyi Adeleke was...