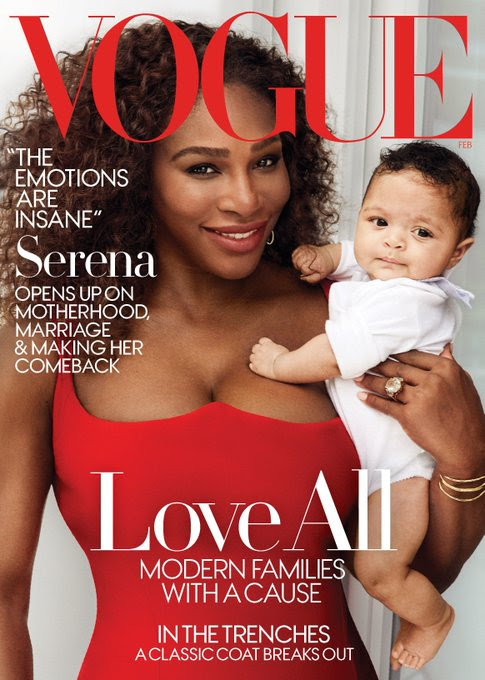 Serena Williams is a maternal goddess on the cover of Vogue’s February issue!

Dressed in a fitted cherry red number and flashing her stunning wedding ring while holding her precious daughter, Alexis Olympia, in her arms, the 36-year-old tennis pro is the epitome of strength.

But shortly after her daughter’s birth in September, Williams faced one of the scariest medical complications of her life. She alluded to the tough time when sharing the first photos of her newborn daughter on social media, but in her new cover story, she laid out exactly what happened.

“That was an amazing feeling,” Williams told Vogue. “And then everything went bad.”

The next day Williams grew concerned by her shortness of breath, knowing it was a sign of blood clots. A CT scan showed she was right and that small blood clots had settled in her lungs. She later opened up her C-section wound after an intense coughing spell, and in the surgery to close up the wound, doctors found a large hematoma had flooded her abdomen.

When the couple finally returned home with their baby a week later, they learned their night nurse was no longer available. It was a difficult time for the new mom.

READ ALSO
#BBNaija: "I am attracted to Maria's personality, not Maria herself" - Whitemoney (Video)

“I was happy to change diapers but on top of everything she was going through, the feeling of not being able to help made it even harder,” Ohanian said. “Consider for a moment that your body is one of the greatest things on this planet, and you’re trapped in it.”

Some of Williams’ frustrations affected her experience as a first-time mother.

“Sometimes I get really down and feel like, Man, I can’t do this,” she said. “It’s that same negative attitude I have on the court sometimes. I guess that’s just who I am. No one talks about the low moments — the pressure you feel, the incredible letdown every time you hear the baby cry. I’ve broken down I don’t know how many times. Or I’ll get angry about the crying, then sad about being angry, and then guilty, like, Why do I feel so sad when I have a beautiful baby? The emotions are insane.”

But now that she’s become a parent, Williams noted that it’s changed her entire outlook on her life and her professional career.

“To be honest, there’s something really attractive about the idea of moving to San Francisco and just being a mom,” she said. “But not yet. Maybe this goes without saying, but it needs to be said in a powerful way: I absolutely want more Grand Slams. I’m well aware of the record books, unfortunately. It’s not a secret that I have my sights on [beating the record with] 25.”

Despite her ambition, Williams doesn’t let herself get consumed with the desire to win.

“I think having a baby might help. When I’m too anxious I lose matches, and I feel like a lot of that anxiety disappeared when Olympia was born,” she said. “Knowing I’ve got this beautiful baby to go home to makes me feel like I don’t have to play another match. I don’t need the money or the titles or the prestige. I want them, but I don’t need them. That’s a different feeling for me.”

She knows that there’s an expiration date on her life as a professional athlete, but that just drives her to work harder.

Williams recently had to drop out of the Australian Open, telling fans she wasn’t where she wanted to be physically.

Violette - January 7, 2021 0
Big Brother Naija star Nengi has become the new Santa Claus in town as she gifts her colleague Lucy with a stunning six-figure to...

#BBNaija: My money can’t be from married men — Tacha react to Maria’s ongoing...

Omah Lay deserves the Next Rated Award ahead of Bella Shmurda — Lil Kesh...

Violette - November 23, 2020 0
Talented singer and songwriter, Lil Kesh has picked Omah Lay as his favorite to win the next rated award ahead of Bella Shmurda, Tems,...