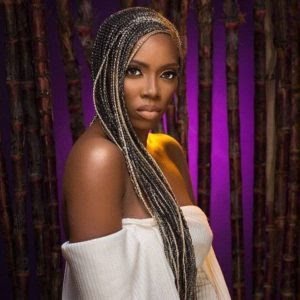 Tiwa Savage has joined the list of celebrities who bought or completed their own houses in 2017.

The sexy and beautiful singer made this known via her Instagram account on Sunday, December 31st, 2017 with a picture of a section of her house and was also thankful to God for a very good 2017.

2017 has indeed been a very fruitful and good year for Tiwa Savage. Career-wise, in 2017 Tiwa Savage was able to sign a deal with Jay-Z’s Roc Nation Label, making her the very first woman from Africa to achieve that.

It would be also recalled that in 2017, Tiwa Savage was honoured by BBC as one of the 100 most inspirational women in the world. Tiwa Savage was among the three African women honoured with the prestigious award.

In 2017 also, Tiwa Savage was able to lay to rest the drama that encapsulated her marriage to her former manager, Tee Billz. The two were able to work on their marriage and settle their differences.

The couple made everyone know that they had resolved their differences when Tee Billz climbed upstage while Tiwa was performing to give his wife a very deep hug and kiss to the admiration of their fans.

Johnson Olumide - January 1, 2018 0
Reports from Spain have it that Enzo Zidane has been dismissed by La Liga outfit Alaves after failing to hold down a regular first-team...

Violette - June 9, 2018 0
The International Criminal Court (ICC) has overturned the conviction for war crimes and crimes against humanity of former Democratic Republic of Congo Vice-President Jean-Pierre...

Eddie Andy - April 1, 2018 0
Tuface, has expressed displeasure at the seeming inability of the President Muhammadu Buhari-led administration to secure lives of Nigerians against the destructive activities of...

Violette - July 29, 2018 0
An investigation by LeadersNG into the activities of the promoters of 67millionyouth Initiative has revealed that many of them are proxy working for President Muhammadu Buhari’s...