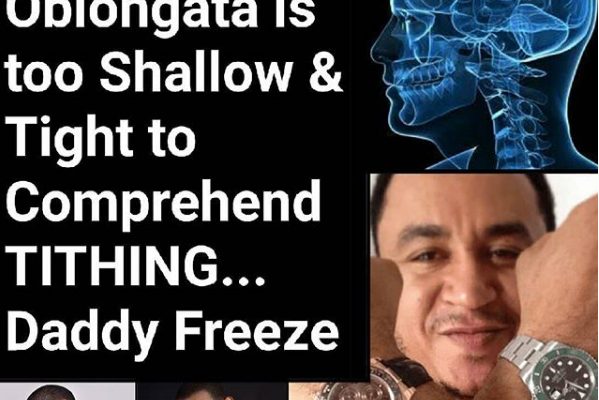 Nollywood actor and social critic,Uche Maduagwu has taken a swipe at media personality ,Daddy Freeze and his fiancee. Uche who is always slamming Daddy Freeze for his stance against tithing,says Freeze is not morally qualified to judge pastors as he abandoned his first wife and two kids.

Following the interview by Freeze’s new partnerin which she said her ex-husband was gay,Uche Maduagwu questioned why she can be Freeze’s fiancee when he is not officially divorced.

Checkout his posts below

How can you be a “fiancee” to a Man whose Divorce case is still in Court? Is this a Joke???? And you condemn Tithe? This is a blatant Shame & an irreparable disgrace to the institution of marriage and Church! Omg, this absurdity and nonsensical behavior has to stop. Is there no shame again in some people’s destiny? Let’s get the fact right, if a mans divorce case is still in court, it means in clear terms that he is still legally, i repeat, LEGALLY married to his wife, until the court says otherwise… Right? So how on earth, can such a person now be referring to himself as “a betrothed man” to another woman? From which planet?

Please to the lawyers in the house, where in the LAW is this practice of folly permitted? This is the height of spiritual malady. Are these the kind of people that we allow to openly criticize our Pastors and tithing? Are these the shameless set of people we should be debating our christian values with?

This is an unmerited shame and a slap on the face. When did we become this morally deficient that we now allow individuals who desecrate and mess up the holy institution of marriage without regards, to shamelessly stand before us to ridiculing our religion, and even raising questions about our spiritual dogma, and shared beliefs?

Your Medulla Oblongata is too shallow and Tight to comprehend tithing…??? @daddyfreeze Finally brethren, i think I’ve been able to unravel why this self acclaimed “leader” finds it extremely difficult to comprehend Tithing even when its clearly stipulated in Malachi 3:10? I think the lower or hindmost part of his brain is exceedingly too shallow to absorbing the spiritual efficacy of tithing in modern day Christianity, his shallow mind is still entangled subconsciously in the fabrics of logic and reason, which is never enough in the interpretation of spiritual and ecclesiastical dogma, so i think now we can understand where is childish bigotry is emanating from.?? @daddyfreeze Its obvious you always shy away from superior argument especially when it involves me because you know your flamboyant ignorance is relatively too broke and can’t afford rubbing shoulders with my coat of many wisdom.? Listen, Tithing is not a superficial religious doctrine that is proclaimed as true without proof, its scriptural, it would be an act of spiritual recklessness for you to ignore Malachi 3:10 while asking people for other verses, you can’t separate the Old testament from the new, the bible is one. Tithing is not by force, so stop drinking paracetamol on someone else headache.