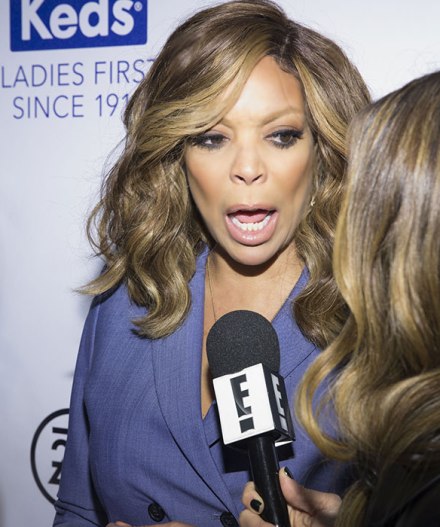 Wendy Williams had Kim Kardashian on blast nevertheless on Tuesday.

The host criticized the reality star’s latest round of nude and semi-nude pictures, claiming she was ‘desperate’ for attention, and that her husband Kanye West was not giving it to her.

‘Kim it’s clear Kanye has nothing for you except dribble and feeble conversation,’ Wendy said.

‘It is clear that Kanye does not pay attention to you. It’s clear to me that you’re desperate, desperately trying to stay in the spotlight.’There is no man…’ ‘Kanye makes money, Kim makes more, why are you still doing this?It’s not even about the mother thing, forget the mother thing, because a lot of people will say, “Oh, she’s a mother.” It’s about: she doesn’t have to do that anymore.’

Wendy went on to claim Kim’s racy shoots were akin to ‘Cardi B returning to the pole on a Saturday night.’

‘There were a lot of racy pictures; We saw full boob… sure she has a beautiful body, but so what. Between taking filtered selfies and the 25 hours it probably took to braid your hair that way.’

Violette - December 13, 2019 0
American Model and actress, Kim Kardashian has taken to her Instagram Page to share a cute and stunning picture of the West family as...

Johnson Olumide - February 17, 2020 0
Kylie Jenner continues to reach more milestones amid situations and rumors regarding her breakup with rapper Tyga recently. She aren't going to be bordered about that as she posted throwback pics of...

Watch moment Tems met Rihanna for the first time, weeks after her dinner with...

I have always been a bad girl – BBNaija Khloe

Johnson Olumide - January 2, 2020 0
BBN’s reality star, Khloe has taken to her IG page to disclose to her followers that she has always been a bad girl that...