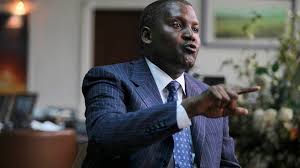 The ever amazing CEO and chairman of Dangote Inc is still africa’s and world Richest Black Billionaire with an estimated $12 billion asset. he was in the news last year when it was announced that he lost $25 million in investment.

1. Aliko Dangote: $12,2 billion. Dangote is the undisputed richest person in Africa, he also happens to be the richest black person in the world. He founded the Dangote Group 35 years ago and still serves as its CEO and president. The vast majority of his wealth is derived from Dangote Cement. Dangote is an active philanthropist and focuses his charity work on education, agriculture and health.

2. Mohammed Al Amoudi: $8,4 million Al Amoudi moved from Ethiopia to Saudi Arabia when he was 19. He made his fortune through government contracts and real estate development. He has since diversified into oil, agriculture and mining with interests across the globe.

3. Mike Adenuga: $6,1 billion Adenuga made his fortune in telecoms and oil. He currently serves as the chairman of Globacom which has 36 million clients. Adenuga owns a majority stake in Nigerian oil company Conoil. He drove a taxi while he studied towards his MBA.

4. Isabel Dos Santos: $3,1 billion Dos Santos is the richest black woman on the planet and at 44 the youngest person on the list. She is the daughter of Angolan president Juan Eduardo Dos Santos. She made her fortune through investments, some of which have been linked to her father.

5. Oprah Winfrey: $3 billion Oprah is the only African-American woman on the list. She overcame a tough childhood (often living without electricity or running water) to become a media mogul. Oprah has never been shy when it comes to helping the less fortunate and founded the Oprah Winfrey Leadership Academy in South Africa.

6. Robert Smith: N9b Smith worked at Goldman Sachs for many years, he left to start his own company in 2000. Since then Vista Equity Partners the private equity firm he founded has done well-enough to propel him into the billionaire’s list. Smith has also signed the Giving Pledge

7. Patrice Motsepe: N6.6b Reortedly the first African billionaire. Motsepe is the brother-in-law to the acting president of South Africa, Cyril Ramaphosa. He is a founding member of mining company African Rainbow Minerals. In recent years Motsepe has pledged to give away half his fortune by signing the Giving Pledge by Bill Gates.

Johnson Olumide - February 17, 2020 0
Filipino boxer, manny Pacquiao is one among the greatest in boxing history, at just 32 year old he was elected to the Philippine House of...

“Thank you for your gummy smiles” – Simi pens heartfelt note to her daughter...

Violette - November 30, 2020 0
Afropop singer and songwriter Simi has penned a heartfelt message to her daughter, Adejare, who turned six months old today, November 30. It would be...