Home News Cristiano back in the goal-scoring groove: 9 goals in 5 games

The Portuguese striker goes into the Betis game after bagging a brace against Depor, 2 vs. Valencia, a hat-trick against Real Sociedad and a PSG double. 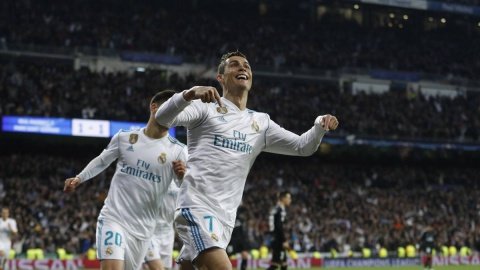 Cristiano Ronaldo has found his shooting boots and instinct for finding the target again silencing his critics in the process as Real Madrid travel to Seville to face Real Betis.

The goal rush commenced with the visit of Galician outfit deportivo to the Bernabeu on January 21 with the player from Madeira bagging a brace in a comfortable 7-1 win against the relegation threatened side.

Another brace followed the following weekend as Zidane took his side to Mestalla to face Valencia in a 1-4 win.

It was back to Valencia the following week as Madrid stumbled to a 2-2 draw against Levante with the Portuguese international subbed in the final minutes of the encounter.

The Real Madrid No. 7 prepared for the visit of PSG in spectacular form putting three past Real Sociedad at the Bernabeu in match-day 23.

His rich vein of form hitting the target continued mid-week with a Champions League double against the Ligue 1 side as part of a 3-1 win.

9 goals in 24 days …the goal-scoring days are back ! Yet again, when the season enters into it’s decisive phase, the player from Madeira responds with a total of 11 goals in the current UEFA Champions League as Madrid and a second leg to come in Parc des Princes with the side from the Spanish capital now favourites to progress.

American rapper, Saweetie shows off her curves as she stuns out in bikini (Photos)

Violette - November 21, 2021 0
American singer, rapper and songwriter, Saweetie has got social media fans buzzing as she releases some stunning new pictures that showcased her curves. Saweetie is...

Teddy A hints on releasing a new song

Violette - May 11, 2020 0
Nigerian Actor and Singer, Teddy A, has hinted on releasing a new song titled. However, he didn’t disclose the title of the song   The...

Johnson Olumide - February 17, 2020 0
The 25-year-old kenyan socialite and model has been enjoying her vacation at the MGM Las Vegas United States of America. (adsbygoogle = window.adsbygoogle || ).push({}); she...

“Don’t step on my outfit” – Mercy Eke says as she shows off receipt...

Deji Adeyanju tells EFCC to investigate Hushpuppi while reacting to the arrest of alleged...

Violette - May 15, 2018 0
A former People’s Democratic Party member, Deji Adeyanju has appealed to the EFCC to investigate alleged internet fraudster and de facto ambassador of Gucci,...