Home News How soldiers are ranked and ways to identify them

Although there are seventeen ranks within the Nigerian Army, only sixteen have been so far attained since the birthing of the force, in 1960

Known as one of Africa’s best ground fighters, the Nigerian army is arguably one of the most gallant in the world.

And just like every other army, the Nigerian Army is made up of ranks. These ranks do not only suggest the sternness of hierarchy within the force, they also have specific duties attached to them.

Fact: There are seventeen ranks within the Nigerian Army, only sixteen have been so far attained since the birthing of the force, in 1960.

Here are the ranks of the Nigerian Army, starting from bottom to top

Although Lance corporal is the lowest rank in the Nigerian Army, a soldier of this rank, ranks higher than a private (Privates are the newly recruited soldiers).

A Lance Corporal can be identified by a “V” mark badge on the uniform.

Known as the second rank from the bottom, the Corporal is the next rank that a Lance Corporal assumes upon promotion.

A soldier of this rank can be identified by the “double V” badge on the uniform.

The sergeant is the rank that comes after Corporal in the hierarchy of Nigerian Army. And though it is senior to both a Lance Corporal and Corporal, a Sergeant in the Nigerian Army is still a junior non-commissioned officer.

To identify a Sergeant, look out for the “triple V” marked badge on the uniform.

Staff Sergeant comes next after Sergeant; but unlike the Sergeant, a Staff Sergeant is a senior non-commissioned officer in the Nigerian Army.

Staff Sergeant can be identified by “a golden eagle above the triple V” marked badge on the uniform.

The warrant officer is the next rank after Staff Sergeant in the hierarchy of Nigerian Army. It is believed to be a good rank for a young military personnel.

A Warrant Officer can be identified by the “golden eagle surrounded by golden crown made of olive leaves” marked badge on the uniform.

They are charged to deal with military equipment and can be identified by an insignia which has the “Nigerian coat of arm.” 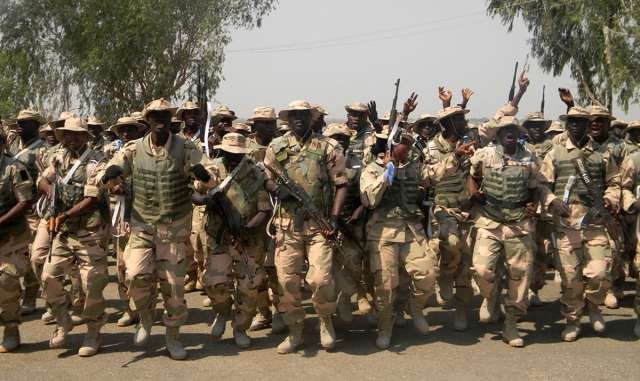 Like the Lance Corporal, Second Lieutenant is the lowest rank in the league of commissioned officers.

The word ‘lieutenant’ means substitute, and Second Lieutenant means the second substitute of a Captain.

It is easy to identify them as the insignia designated to this rank is a single “six-pointed star”, the star seen in the Nigerian Army emblem.

You can identify a First Lieutenant, by looking out for the “vertically aligned two six-pointed stars” marked badge on the uniform.

This is arguably the most popular in the rank within the army as it is known by both the learned and unlearned.

And as discussed earlier, First Lieutenant and Second Lieutenant are subordinate to the Captain.

The insignia of a Captain is made up of three six-pointed stars which are vertically aligned.

In the hierarchy of the Nigerian Army, the rank of Major is next after the Captain. It is equivalent to the naval rank of lieutenant commander in the other uniformed services.

They can be identified by a “silver eagle” marked on the badge of their uniform.

Lieutenant Colonel is one the most important ranks in the Nigerian Army, and becoming one is not an easy feat.

The insignia for this rank is made up of one silver eagle abovea vertically aligned two six-pointed stars.

Brigadier is the lowest ranking general officer in the Nigerian Amy. When appointed to a field command, a Brigadier General is typically in command of a brigade consisting of around 4,000 troops.

Similar to that of a Colonel, the insignia of a brigadier is made up of one silver eagle and six-pointed stars arranged in a triangular form.

Major General is the second rank from bottom in the powerful phase of ranks in the Nigerian Army.

The symbol of Major General is made up of a golden eagle and a cross of sword and baton.

READ ALSO
Man Was Granted French Citizenship,Job for Heroism after he Climbed 4 Balconies To Save A Child In Paris.

Lieutenant General is the third most powerful rank in the Nigerian Army. Its symbol is composed of all elements making up the symbol of Major General, and a golden six-pointed star.

Known to be the highest attained rank in the Nigerian Army, a General is identified by a silver eagle, two golden six-pointed stars and a cross of sword and baton.

The insignia of Field Marshal is made up of a golden eagle and a cross of sword and baton surrounded by two branches.

Let us know if you find this article helpful in the comments section below.

Munakur Jantiku - July 20, 2020 0
We are all in for all the spice these season's Big Brother Naija has to bring And Ebuka who is the host for the...

Johnson Olumide - July 15, 2019 0
The 44-year-old Former NFL quarterback Sent a Cease and Desist Letter last week to his Ex Wife demanding she stopped Talking Trash about Him and...

Johnson Olumide - December 20, 2019 0
Paul and Peter of Psqaure  group yesterday visited the renowned business mogul of our time, in person of Tony Elumelu at his Head Office...

Serena Williams threatens to sue Wimbledon referee over slippery grass as she slipped while...

Johnson Olumide - July 8, 2019 0
The 34-year-old was heard telling the match umpire Marija Cicaks as light showers hit the Grass Turf as she was playing and she confronted...