Home News What is the meaning of wearing an anklet? 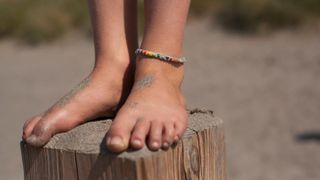 What are some common jewelry manufacturer marks?

What are some tips for buying replica designer jewelry?

Anklets, which are also called ankle bracelets, are commonly referred to as payals in India. An anklet with trinkets attached is called a Pajeb in India. Anklets are featured in Indian marriages and are donned along with saris. Sometimes, anklets are joined by a chain on both ankles. The practice, which originated in Southeast Asia, is meant to add to the femininity of a woman’s walk. The chains cause the wearer to take short, tripping-like steps.

Wearing anklets became fashionable in the United States during the later portion of the 20th century. Like bracelets, the jewelry can be used as medical IDs for people who have conditions such as diabetes or epilepsy.

The idea of wearing an anklet has extended to the area of law enforcement as well. Anklets are used for prisoners who are under house arrest. Some anklets feature auditory functions, while others may monitor the prisoner for the consumption of alcohol.