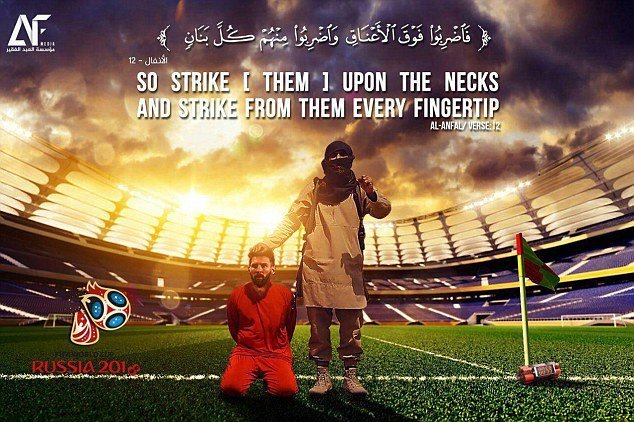 The photoshopped image shows the Barcelona and Argentina star on his knees wearing an orange Guantanamo Bay-style jumpsuit, often seen worn by victims in the terrorists’ execution videos.

Messi is depicted on his knees inside Moscow’s Luzhniki Stadium – venue for the World Cup final – with a masked jihadi to his left and the threat ‘so strike them upon the necks and strike from them every fingertips’ emblazoned above them.

The official logo for the tournament has been altered to make it look like the world cup and the number eight in 2018 has been damaged.

READ ALSO
Tiwa Savage Replies Lady Who Said She Is ‘Overrated’
Sticks of dynamite can also be seen resting up against the halfway-line flag in the picture as the jihadi holds Messi’s hair with one hand and gestures with his other hand.
It’s not the first time the five-time world footballer of the year has been targeted by ISIS.

In October another poster emerged showing the Barcelona star behind bars in an attempt by terror fanatics to spread fear ahead of the the tournament in Russia.

READ ALSO
Will Smith to Perform Official World Cup Anthem
It came after another chilling poster showed a terrorist armed with a gun and explosives near a football stadium in Russia along with the words: ‘I swear that the Mujahideen’s fire will burn you… just you wait’.
According to SITE, which monitors terror activity, pro-ISIS group the Wafa’ Media Foundation, published the World Cup warning in the wake of another recent threat. 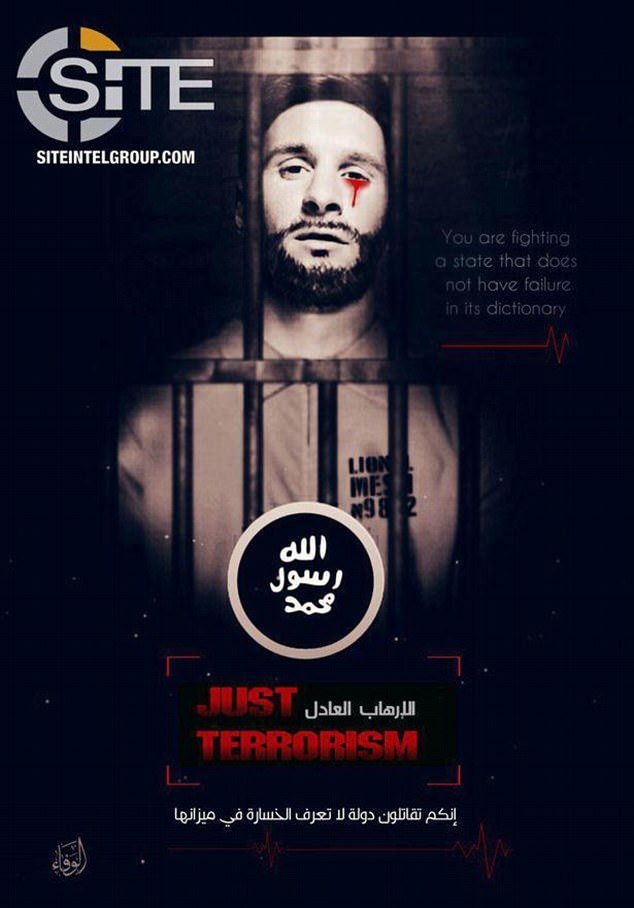 Violette - July 22, 2020 0
Laycon is really doing great for himself outside the Big Brother Naija show as he becomes the first housemate to get verified on Instagram. The...

Diddy celebrates Cassie as she turns a year older

Johnson Olumide - December 20, 2019 0
American Rapper Diddy is today celebrating his on and off girlfriend Cassie who turns a year older yesterday, August, 27th. He hared a video of...

Nicki Minaj Breakup with Meek Mill Over His Constant Cheating

Johnson Olumide - May 12, 2020 0
Nicki Minaj Breakup with Meek Mill Over His Constant Cheating The rumors are yet to be officially confirmed by both parties , but more revelations...